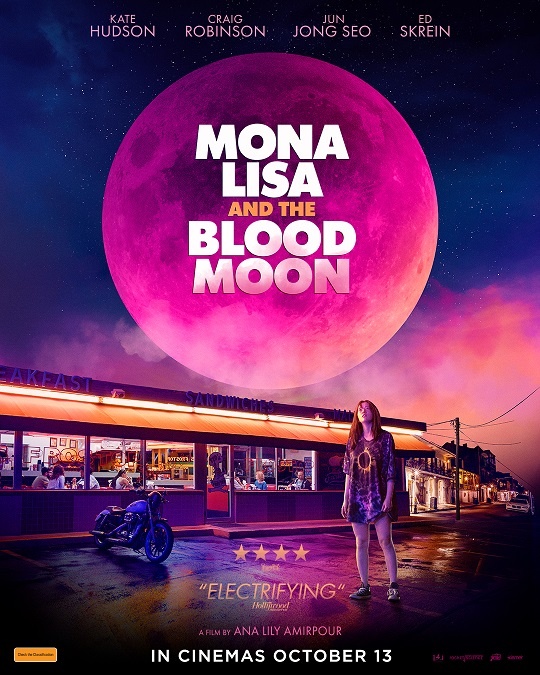 Thanks to Kismet we are giving away 10 x in-season double passes to see MONA LISA AND THE BLOOD MOON when it opens in cinemas October 13!

Join a telekinetic young woman on a wild and bloody trip to New Orleans in this subversive horror-comedy starring Kate Hudson.  Mona Lisa And The Blood Moon is a mind-bending adventure set in the swampy neon-lit streets of New Orleans, and inspired by fantasy-adventure movies of the 1980s and ’90s. At its center is a girl with strange and dangerous abilities who escapes from a mental asylum and rejoins the chaos of modern-day civilization, on the hedonistic streets of the French Quarter.

For most of her life, Mona Lisa Lee has been institutionalised – straitjacketed and nearly catatonic. But under the influence of a blood moon, she decides to break free, finally tapping into her supernatural ability to control human minds. Escaping into New Orleans’ French Quarter, she must figure out how to survive in a world she doesn’t understand, and no-one can stand in her way.  A hostile world, dark humour, odd pairings, superpowers – this thrill ride inspired by your beloved 80s fantasy-adventure movies will have you hypnotised.

Starring a ferociously bewitching Jeon Jong-seo (Burning), Iranian-American director Ana Lily Amirpour’s new film explodes onto the screen with her trademark bold visual stylings and twists on genre. Soaked in neon, New Orleans is imbued with a carnivalesque feel that is matched by its kooky inhabitants, including a stripper (played with trashy relish by Kate Hudson) who exploits Mona Lisa’s talents for financial gain and the dogged cop (an unusually straight-faced Craig Robinson) hot on the escapee’s trail. A hostile world, dark humour, odd pairings, superpowers – this thrill ride inspired by your beloved 80s fantasy-adventure movies will have you hypnotised.

“STYLISHLY IRONIC … MONA LISA AND THE BLOOD MOON IS A LARK, A CONTRADICTION – A LURID, VIOLENT, CAUGHT-IN-THE-GUTTER MOVIE THAT’S ALSO A NIMBLE AND KNOWING TALL TALE FOR ADULTS.” VARIETY

MONA LISA AND THE BLOOD MOON – In Cinemas October 13!

To win an in-season double pass all you need to do is fill in your details below.