Hiro Hamada is a fourteen-year-old boy who lives in San Fransokyo. Hiro loves robot fighting and has created a brilliant microbot that can do great damage to much larger ‘bots. Hiro’s prowess with robotics is shared by his older brother Tadashi. He hates seeing the younger Hamada wasting his time gambling on robot fights and persuades his sibling to apply to the university where Tadashi is studying. The university has a program that encourages young geniuses to work on world-changing inventions and technologies.

Hiro is accepted into the program and looks set to follow his older brother into a brilliant scientific career. An accident befalls Tadashi that changes the course of young Hiro’s life. In order to get back on track, Hiro needs the help of Tadashi’s university friends and Baymax, a robot Tadashi was developing. Baymax is a personal healthcare robot with an inflatable body and a comprehensive range of medical skills.

Disney’s latest computer animated feature film is based on a Marvel comic that was created in the late 1990s. The comic is not one of the better-known Marvel titles. Big Hero 6 is a super-hero team, but their origin story has been significantly changed for the movie. Disney (who now owns Marvel) worked in tandem with Marvel to create this new more PG version of BIG HERO 6. Although Marvel were consultants, the overall shape and result is a recognisably Disney product aimed at a family audience.

The look of the film is impressive. This is first-class, big-budget computer animation. BIG HERO 6 lifts the bar for other animation studios.  The story-telling is solid. We are invested in young Hiro’s story from the beginning, when we learn that he and his brother lost their parents in a car accident years before and are being raised by their aunt. The Hamada brothers’ relationship anchors the rest of the movie and sets up Hiro’s later connection to Baymax the medical bot. When we are introduced to Tadashi’s hyper-intelligent university friends, they are swiftly, yet memorably presented to us by the top-notch screenplay. We are given time to understand them as separate characters with recognisable traits.

The effect of all this care and attention in plotting, characterisation and animation, is that the audience is drawn right into Hiro’s life in San Fransokyo. (It’s never addressed in the movie, but the city is an alternate universe version of San Francisco that was rebuilt by the Japanese after the 1906 earthquake.)

Hiro’s journey is–naturally–a hero’s journey and he learns lessons along the way. This unfolds in a way that is well-paced and always entertaining. This film knows when action is required and when it needs to be fun. Neither the kids, nor the adults in the audience will be bored. Baymax is a lovely creation who has a surprisingly emotional arc story for a robot built to deal with human medical needs (he’s like a cuddly version of Star Trek Voyager’s medical hologram). Not that I had any doubt Baymax would score with audiences, but the number of kids getting their picture taken with the promotional Baymax in the foyer, after the screening, points to this being another huge hit for Disney.

NOTE: The short animation FEAST (6 minutes) screens before BIG HERO 6. To quote the press kit: “The story of one man’s love life is seen through the eyes of his best friend and dog, Winston, and revealed bite by bite through the meals they share.” FEAST is the work of first-time director Patrick Osborne and will completely connect with dog lovers. Cat lovers can eat their popcorn quietly and think of their favourite YouTube videos involving kittens. Winston is super-cute, it has to be said. 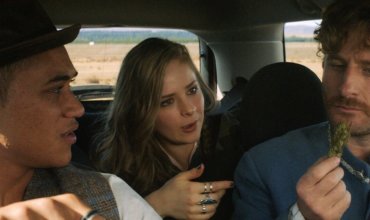