A Stitch in Time Trailer 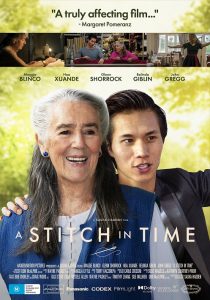 When Liebe’s (Maggie Blinco) partner Duncan (Glenn Shorrock) loses his job singing at the local pub, the former dressmaker becomes motivated to help him realise his dream to record an album. Inspired by Hamish (Hoa Xuande), a young Chinese fashion designer who she meets at the local markets, she decides to make clothes again to compensate for the loss of income.

Friction arises when the noisy sewing machine disrupts Duncan’s songwriting, and he tries to tell her to stop. However, a long-forgotten passion has been reignited. Feeling unloved and disrespected, Liebe leaves Duncan and moves in with her best friend Christine (Belinda Giblin), much to the horror of Christine’s husband Justin (John Gregg), to try and pursue a dream of her own. But as Duncan continues the lifelong search for his audience now alone, he realises that Liebe was his audience all along.

He wants to get her back. But will he destroy all she has become?