Just premiered over at MovieFIX is the trailer Premiere of ‘A Few Best Men’ word out of the recent Queensland Movie Convention was that the film stole the show and was one of the best received. From the writers and producers who brought us the hilarious ‘Death at a Funeral’ and from the director of ‘Priscilla Queen of the Desert’ Stephen Elliot comes a film that is touted to be up there with ‘Bridesmaids’ and ‘The Hangover’.

When English lad David announces he is getting married to an Australia, his hapless mates give a whole new meaning to the phrase ‘for better or worse’! The chaos-filled wedding day tests their new marriage, challenges David’s relationships with his three best men, and risks turning what should be the best day of their lives into the worst. A FEW BEST MEN is a hilarious culture clash between his friends and her family – because blood is thicker then water, and so are David’s mates!

The film stars Xavier Samuel who we last saw in Twilight Eclipse and will be in next years ‘Drift’, Rebel Wilson (Bridesmaids), Olivia Newton-John who really needs no introduction and Kris Marshall (Love Actually, Death at a Funeral).

A FEW BEST MEN is due to hit cinemas Australia Day 2012! and click the poster below to head over to MovieFIX to see it. 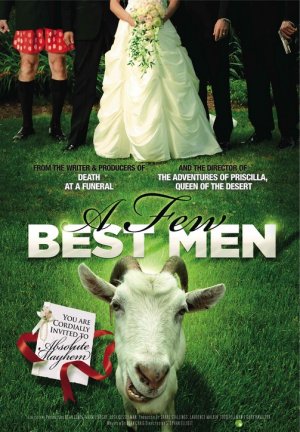