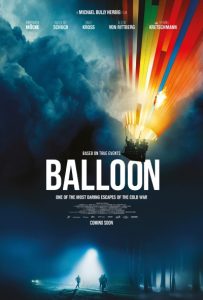 Thüringen, Summer 1979. The Strelzyk and Wetzel families have been working on an audacious plan for more than two years: they want to flee East Germany in a self-made hot-air balloon. But the balloon crash-lands just before the West German border. The Stasi finds traces of the attempted escape and launches immediately an investigation, while the two families are forced, under extreme time pressure, to build a new escape balloon. The Stasi get closer and closer each day – a nerve-racking battle against the clock begins. An incredible and gripping true story of resistance.