In the last week there’s been a rumour circulating that the next DC Comics based film, Batman v Superman: Dawn of Justice is being split into two films. The rumour kicked off after the attached image surfaced online. 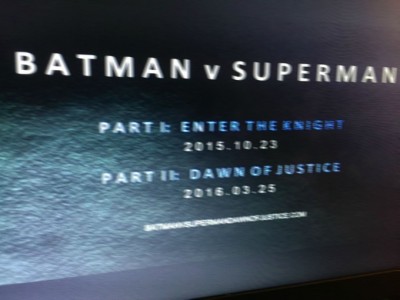 The image implies that there are two Batman v Superman films on the way, the first one titled “Enter the Knight” scheduled for a release in late 2015 with the follow-up “Dawn of Justice” targeting a 2016 release as expected.

What sounds like a plan to give Batman an introductory solo film into the cinematic DC Universe would certainly allow much more flexibility in establishing this new take on the character. By all accounts this new version will be somewhat different from recent cinematic incarnations of the Dark Knight.

Superman himself however Henry Cavill has been reported as saying the above rumour is not true, Batman v Superman: Dawn of Justice remains as the one film directed by Zack Snyder, for release in 2016.