You can never have too many biopics: Lena Headey in talks to join Banking on Mr. Toad

Lena Headey is in talks to join the cast of the upcoming biopic Banking on Mr. Toad. The film tells the story of Kenneth Grahame (played by Toby Kebbell), the author of the children’s novel The Wind in the Willows, which was first published in 1908, and later spawned countless animated and live-action remakes (the latter of which are utterly terrifying). Headey is considering the role of Elsie, Grahame’s wife, and the story will follow her, Grahame, and their son Alastair, who is plagued by ill-health. The film is also set to feature CGI characters from The Wind in the Willows. 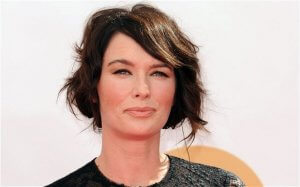 It was revealed in July of this year that Nicholas Hoult would be playing J.R.R Tolkien, in the upcoming biopic Tolkien. Now, Lily Collins is set to play Edith Bratt, Tolkien’s wife, and the woman who supposedly inspired the elven princess characters in his The Lord of the Rings trilogy. Anthony Boyle, who played Scorpius Malfoy in J.K. Rowling’s Harry Potter and the Cursed Child, has also been reportedly cast for the film. The film, written by David Gleeson and Stephen Beresford, will be directed by Dome Karukoski (Tom of Finland, The Grump). The biopic follows the young, orphaned Tolkien who finds friendship, love, and artistic inspiration from a group of likeminded friends. Tolkien’s experiences in WWI would go on to become the inspiration for his most famous works, including The Hobbit and The Lord of the Rings, which both spawned film trilogies directed by Peter Jackson. The film is not set for release until 2018. 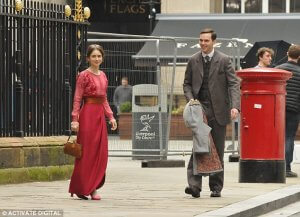 Lily Collins and Nicholas Hoult on the set of Tolkein.

It would appear biopics are the hot new trend in upcoming cinema. Goodbye Christopher Robin, which comes out in Australian cinemas on Novermber 23rd, is the story of children’s author A. A. Milne (Domhnall Gleeson), and his son, Christopher Robin, whose toys inspired the wildly popular world of Winnie the Pooh. The film follows Milne, his wife Daphne (Margot Robbie), their son, and his nanny (Kelly Macdonald), as their family is swept up in the international success of Milne’s books.

A biopic of the late Hugh Hefner is also in early stages of development. It is set to be directed by Brett Ratner and starring Jared Leto.

Considering these films have been in development for sometime, there was clearly something in the water a few years ago, when all these projects initially conceived.

“There’s too many biopics out at the moment.” – no film studio, ever