Stock up on garlic – Bram Stoker is back from the grave.

Paramount Pictures has reportedly acquired the screen rights to Dracul, a prequel to Bram Stoker’s Dracula, and the first authorised by the Bram Stoker estate. The film is rumoured to be in development with It director Andy Muschietti, along with It producers Barbara Muschietti and Roy Lee.

Bram Stoker’s classic novel Dracula was written in 1897, and has since become one of the most iconic horror texts, which spawned countless films, television shows, comics and more, including the 1992 film Bram Stokers’ Dracula starring Gary Oldman, Winona Ryder, Keanu Reeves, and Anthony Hopkins.

Despite the recent pop culture phenomenon of the vampire, Bram Stoker’s great grand-nephew, Dacre Stoker, is determined to stop people forgetting who invented the original cape-wearing bloodsucker. Dacre Stoker, along with internationally best-selling thriller author J.D Barker, has written the proposed sequel Dracul. The story is set in 1868, and follows a 21 year-old Bram Stoker as he wrestles with “…an ungodly evil that he traps in an ancient tower all the while scribbling the events that led him there.” 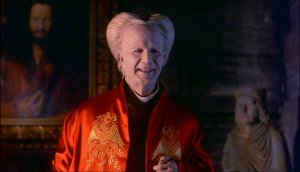 In 2009, Dacre Stoker, with encouragement from screenwriter Ian Holt, wrote and released Dracula: The Un-Dead, in an attempt to “…re-establish creative control…” over Stoker’s original novel.

Looks like there’s no esCAPEing the vampire phenomenon just yet.