Grab your broomsticks and cauldrons and get ready to fly back into the wizarding world with the upcoming sequel to Fantastic Beasts and Where to Find Them. The original film, based on J. K. Rowling’s 2001 book under the same title, was a massive hit, grossing over $800 million for Warner Bros. worldwide. The spell-binding sequel, which is as yet untitled, will be the second of a five-part series, and is once again directed by David Yates. Filming for the sequel began yesterday in Leavesden Studios in the UK, which is owned by Warner Bros. Studios, and is home to the filming for all previous Harry Potter films.

The sequel is set to take Newt Scamander back to London and even Paris, and it is rumoured that it will feature some type of ‘wizarding circus’, a part of the wizarding world we’re yet to see in the PotterVerse. 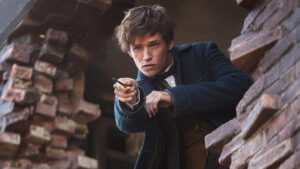 Eddie Redmayne will, of course, be returning as Newt Scamander, along with Johnny Depp as Gellert Grindelwald, and Ezra Miller as Credence (which begs the question, what really happened to him at the end of the first film?). However, the sequel will see a host of new faces in including Jude Law as a young Albus Dumbledore, alongside Zoe Kravitz as Leta Lestrange, who was seen in a moving photo kept in Newt’s expanding suitcase. The sequel will also feature Callum Turner as Theseus Scamander, Newt’s brother, who is mentioned in the original film as a war hero and Auror.

The screenplay is once again written by J.K. Rowling, and is set in 1927, a few months after Newt aided in the capture of infamous Grindewald. However, in the sequel the dark wizard Grindewald as escaped and gathered more followers to his cause. The film will follow a young Albus Dumbledore and his former student Newt, in their attempts to stop him. Here’s hoping the follow-up is as wand-erful as the first film!