Though preproduction is only just underway and a release date is far from being set, a poster has hit the net for Edgar Wright and Simon Pegg’s final film in their Blood and Icecream Triology; The World’s End.

Check it out! (To clear up any confusion, the poster details the list of pubs the flick’s hero will traverse in his epic pub crawl prior to saving the world).

Having first announced their intention to make this flick back in 2007, the pair sure took their sweet arse time.

The film tells of five childhood friends (currently only Pegg and his best mate Nick Frost are confirmed cast members) who reunite 20 years after a failed pub crawl to attempt the feat again. The five have to drink their way to the final pub; The World’s End.

Sounds a little too tame for ‘Mr Wright Here Right Now’ and ‘The Fresh Pegg’ wouldn’t you say? Their last two films have descended into utter, bloody chaos. Don’t despair! The current released synopsis hints at more with these 40-year-old booze hounds said to somehow end up fighting for humankind… Intrigued?

Can the duo prove that things come in threes? Can they pull off a third piece of “fried gold” (a term coined in Spaced and used in Shaun of the Dead and Hot Fuzz – get your Pegg/Wright trivia here folks!). We’ll have to wait and see… 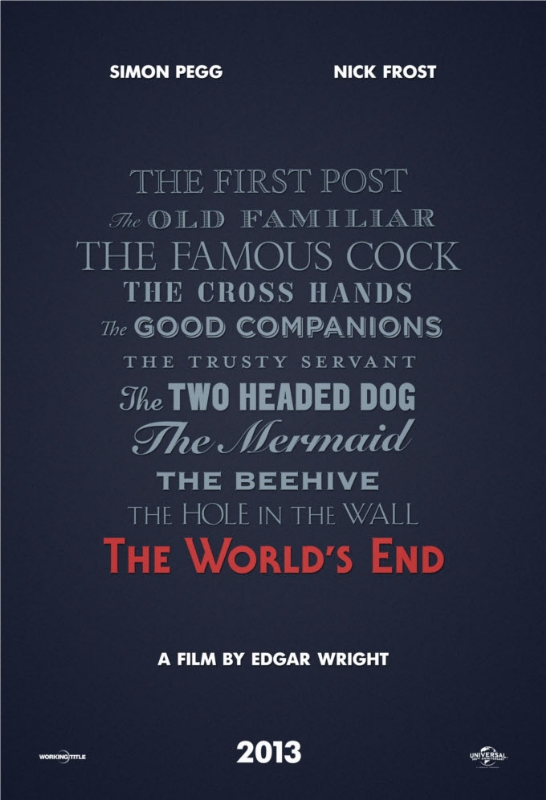