There’s just under two months until the much-anticipated release of season 7 of HBO’s Game of Thrones, and an exciting trailer has been released. After the explosive finale of season 6, fans of the series have been holding out for over a year to learn what’s to become of their favourite characters.

The trailer opens with Cersei taking stock of her mounting enemies; Daenerys in the East, the Greyjoys in the West, the Martells and Tyrells in the South, and the Starks in the North. The Lannisters seem surrounded, but with Cersei in the clutches of some power-hungry madness, she’s convinced she can beat them. Jaime, seen beside her in numerous shots, seems unconvinced. Despite how much I love and admire Cersei, I’m personally hoping season 7 sees Jaime taking her out, Mad-King style.

We also see Daenerys return to Dragonstone, the ancestral home of the Targaryen royal family. The shot of Dany on the throne is potentially foreshadowing of her sitting on the Iron Throne, or perhaps just a red herring to get the fans wondering. Melisandre is also seen at Dragonstone, keeping watch. The Unsullied storm King’s Landing, and we see the full extent of Dany’s power, with her fully grown dragons, and hordes of Dothraki warriors. Hopefully the ships burning in the trailer are not Dany’s. There is a shot of Jorah’s badly infected arm, prompting us to wonder if he’ll find the cure for his grey scale and return to Daenerys in this season. 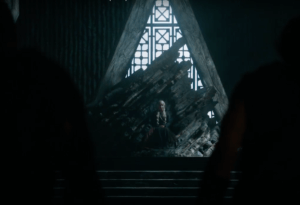 Arya returns to the north, and there’s the potential for her to reunite with what’s left of the dwindling Stark children. It’s also been rumoured that the shots show her looking for Nymeria, her dire wolf, and that the two will be reunited after so many seasons apart. 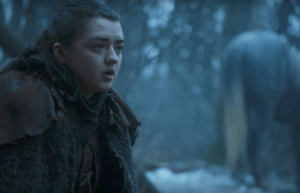 The trailer also shows a flash of Jon choking Littlefinger, and we may see Sansa and Jon seek retribution for the harm Petyr Baelish has caused to Sansa, after selling her to Ramsay Botlon.

There is also a shot of Wildings running from something (possibly the Night King), reminding us that a greater danger is on its way, and winter is finally here.

The series is set to end after its eighth season, and it’s been reported that the final two seasons will feature only 7 episodes, down from the usual 10. On the plus side, fans no longer need to fear the ninth and tenth episodes of each of the final seasons, which usually feature prominent deaths. On the down side, maybe we need to fear all the other episodes equally. I can personally handle anything they throw at us, as long as Tyrion survives.

Games of Thrones Season 7 airs in Australia on July 17. It’s time to start re-watching all six seasons before the seventh flies onto our screens. Check out the trailer below: