This could be taken completely out of context for some people but hilarious for others General Aladeen the leader of the People’s Republic of Wadiya has released an official statement about the death of Kim Jong Il. 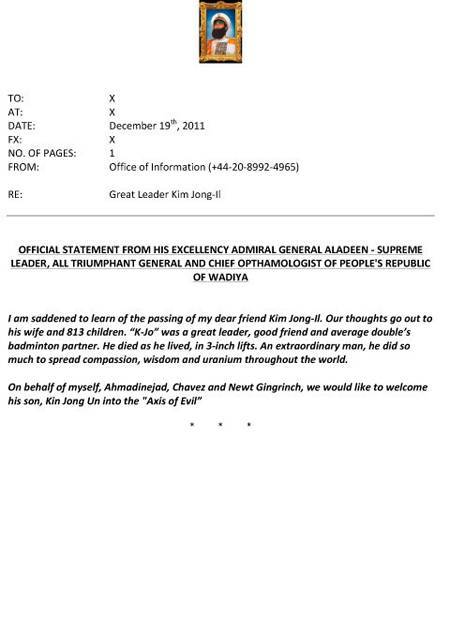 For those who don’t know General Aldeen is the character from Sacha Baron Cohen’s next film ‘The Dictator’ obviously he always likes to cross the line, but this could be taken both ways. I’m still not quite sold on the film but there is quite a hilarious moment at the end. Heres the statement transcribed below.

I am saddened to learn of the passing of my dear friend Kim Jong-Il. Our thoughts go out to his wife and 813 children.”K-Jo” was a great leader, good friend and average double’s badminton partner. He died as he lived, in 3 inch lifts. An extraordinary man, he did so much to spread compassion, wisdom and uranium throughout the world.

On behalf of myself, Ahmadinejad, Chavez, and Newt Gingrich, we would like to welcome his son, Kim Jon-Un into the “Axis of Evil”

You can check out the trailer for ‘The Dictator’ here