G.I. Joe: Retaliation will be released in cinemas on March 28 2013, Bruce Willis and Dwayne Johnson have both joined the cast for the sequel along with several returning cast members from the previous installment.

Retaliation was originally scheduled for release in mid-2012, however it was delayed into early 2013 to allow further post-production as the film was converted for a 3D release. There has been further speculation that the film wasn’t testing well with early audiences however and that in addition to 3D work the film may have undergone additional filming and editing during the second half of 2012 for the final theatrical release.

Time will tell if the additional effort has yielded positive results for the film, March is just a few months away and in the meantime you can check out a new poster, the official plot synopsis and facebook page link all below. 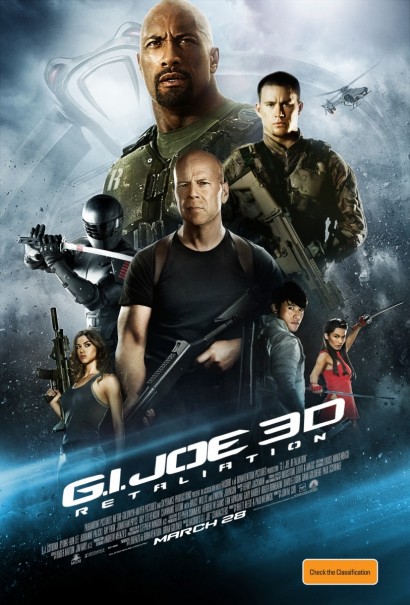 In this sequel, the G.I. Joes are not only fighting their mortal enemy Cobra; they are forced to contend with threats from within the government that jeopardize their very existence.  The film stars D.J. Cotrona, Byung-hun Lee, Adrianne Palicki, Ray Park, Jonathan Pryce, Ray Stevenson, Channing Tatum with Bruce Willis and Dwayne Johnson.  Directed by Jon M. Chu, and produced by Lorenzo di Bonaventura and Brian Goldner, from a screenplay by Rhett Reese & Paul Wernick based on Hasbro’s G.I. Joe® characters.

G.I. Joe: Retaliation is in cinemas across Australia from 28 March 2013.