The short film Would You Look At Her, by Goran Stolevski, has been awarded the Sundance Short Film Jury Award for International Fiction. Macedonian born, Australian based Director and Screenwriter Goran Stolevski accepted the award at the Annual Shorts Award Ceremony in Park City, Utah, this week. Stolevski, who was born and grew up in Macedonia before migrating to Australia in his teenage years, has made more than twenty short films. Collectively his films have played at over 80 festivals across six continents.

Would You Look At Her, which was filmed in Macedonia with the support of the Macedonian Film Agency and Skopje Film Studio, follows a hard-headed tomboy who spots the unlikely solution to all her problems in an all-male religious ritual of Diving For The Cross. Stolevski said of his win:

“After 15 years of making short films, being selected for Sundance feels like a hallucination and winning is like tipping into joyous madness. It’s an enormous honour and I’m so glad I can share this moment with the magical people who have supported me.”

“I’ve always related so intensely to female stories and female perspectives.  I’m so glad the world is starting to wake up to the power and insight of these stories and it’s really a privilege to witness all these incredible women breaking through both behind and in front of the camera.”

Stolevski now returns to Australia to make his television directing debut, slated to direct three episodes of season four of Nowhere Boys. His short film My Boy Oleg, which won the $50 000 Lexus Fellowship, will have its world premiere at the Sydney Film Festival in June. 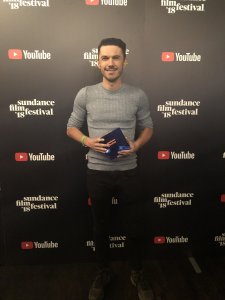