Hackers claim to have stolen Disney’s ‘Pirates of the Caribbean: Dead Men Tell No Tales’

In a rather ironic twist of fate, online pirates claim to have stolen a film from Walt Disney Studios. Originally, the hackers claimed to have stolen an unknown film from Disney, but it has since been rumoured by Hollywood Reporter and Deadline that the film is The Pirates of the Caribbean: Dead Men Tell No Tales, the fifth and final installment of the Pirates of the Caribbean franchise. The hackers have apparently demanded a large sum of Bitcoin to be transferred to them. Otherwise they plan on releasing the film in short increments online for people to stream for free.

After it’s four previous films, the franchise has grossed over $3.73 billion world-wide. With such a potential fortune under threat, Disney and their CEO, Bob Iger, have declined to comment on the situation but are reportedly working with the FBI to investigate the cyber-attack.

The film, which is to be the fifth and final installment of the franchise, will be out in cinemas on 26th May. 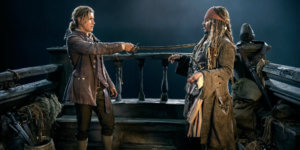