The character ‘Hellboy’ started off in comics published by Dark Horse from writer/artist Mike Magnolia before finding his way into film in 2004 with a feature directed by Guillermo del Toro. The film was popular enough that the character returned to the screen in “Hellboy 2: The Golden Army” in 2008. Ron Pearlman portrayed the character on both feature films and has recently returned to all that makeup for a special appearance.

The special effects company involved with the Hellboy films (Spectral Motion) has played host to a wish through the Make-A-Wish foundation. Young Zachary’s wish was to meet Hellboy and when Ron Pearlman was informed he jumped in to reprise his role for a day and don the horns and makeup once more. Zachary’s wish was made real and the pair shared burgers, shakes and fries before Zachary then had the chance to go through the make-up process himself and transform into the comic-book hero.

Spectral Motion has recently been involved with two make-a-wish events, you can see Zachary and Ron chilling in the image below! 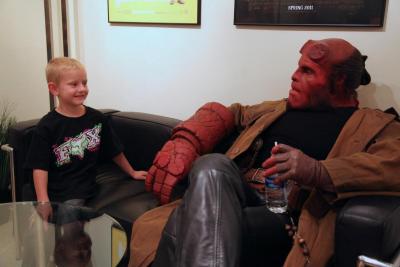