Kevin Smith has been more active with his podcast network as well as directing episodes of Supergirl and the Flash in recent years, however about a year after his almost death through heart attack incident, he’s finally getting back to film directing.

2016 was his last feature film effort with “Yoga Hosers” a follow-up to 2014’s “Tusk”, but after a longwinded process and a few projects not working out (from Mallrats 2 to Clerks 3), he’s finally returning to his old toy box of characters with a new Jay and Silent Bob film.

Always active on social media, Smith posted the following image recently of the front plates for the clappers that’ll be used throughout photography of Jay and Silent Bob – Reboot. See below for his full post. 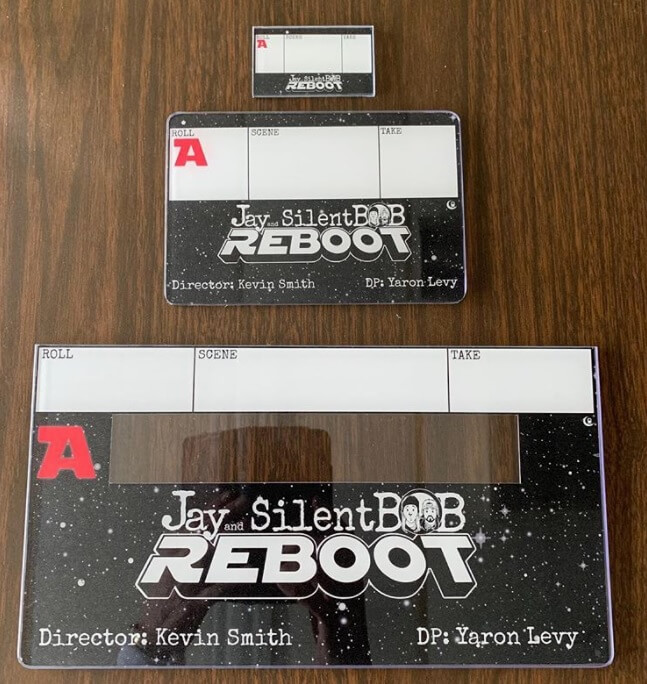 Better Slate Than Never! These are the front plates for the clappers that’ll mark the start of every take of @jayandsilentbob Reboot! The art is by storyboard (and Hit Somebody) artist @jeremysimser, and the Cinematographer who’ll be capturing it all is the hottest, wettest DP I could ask for, Mr. @dpronlevy! Today is the tech scout and tomorrow is the production meeting – the last two steps we take before rolling cameras. The first time I posted about #jayandsilentbobreboot on @instagram was way back on February 9, 2017. It’s been 2 years and a week since that post, during which time I almost died. But a week from today, we finally start rolling on Reboot. Never give up, Kids. Even when your heart wants to. (Photo by @traceylandon!) #KevinSmith#jasonmewes #slate #movie #sabanfilms#universal #neworleans
#slatesforsarah

The new Jay and Bob film commences photography later this month, from what Smith has said previously it’s going to be following a familiar tale, Jay and Bob learn of a reboot in the works to the film Bluntman and Chronic – the comic characters created by Holden and Banky in Chasing Amy, whom are based on Jay and Bob, all within Smith’s own viewaskew – universe.

If all of that sounds familiar no doubt you’re as excited as I am, if it’s not familiar, there are some 90’s pop-culture films that you need to catch up on….