Julius Avery is an West Australian director who wrote and directed his first feature named Son of a Gun starring Ewan McGregor, Alicia Vikander and Brenton Thwaites back in 2014. Since then he has been tapped by J.J. Abrams company bad Robot to direct the Film Overlord which is just about to hit cinemas.. Avery is now working on his next film with J.J. titled Heavy and has also recently been announced as director on the Flash Gordon remake. Take a listen to our chat below.

With only hours until D-Day, a team of American paratroopers drop into Nazi-occupied France to carry out a mission that’s crucial to the invasion’s success. Tasked with destroying a radio transmitter atop a fortified church, the desperate soldiers join forces with a young French villager to penetrate the walls and take down the tower. But, in a mysterious Nazi lab beneath the church, the outnumbered G.I.s come face-to-face with enemies unlike any the world has ever seen. From producer J.J. Abrams, Overlord is a thrilling, pulse-pounding action adventure with a twist.

You can listen to the full interview below or read the transcript.

AccessReel: Hi Julius, how are you?

AccessReel: So for those uninitiated people, what’s the film about?

Julius Avery: Yeah, look, it it’s an action sci-fi horror movie that starts this very dangerous mission in World War 2 called “Overlord”. We get a bunch of Allied paratroopers dropped behind enemy lines. And we follow a small group inside that big operation. They’re going to take out this radio tower and if they don’t complete the mission, a bunch of guys on the beach is going to get killed on the D-day landings. And when they get to the town, nothing is what it seems and they discover this Nazi lab that that’s hidden underneath this church where they’re carrying out these terrifying experiments. And that’s what the movie turns into fiction, becomes like a psycho horror and all bets are off.

AccessReel: Yeah for sure. Obviously the premise of it is pretty nuts. It’s a really cool premise and the trailer is great.

Julius Avery: It was completely nuts when I first read the script. JJ said he watched Son of a Gun, he said, “Come In, we want to see what you want to do next.” And we spitballed a few ideas around and he said, “Look I’ve got this script Overlord, you should take a look.” And I took it home and read it. It was completely bonkers. I thought it was like Indiana Jones on acid. I’ve never read anything like it before. 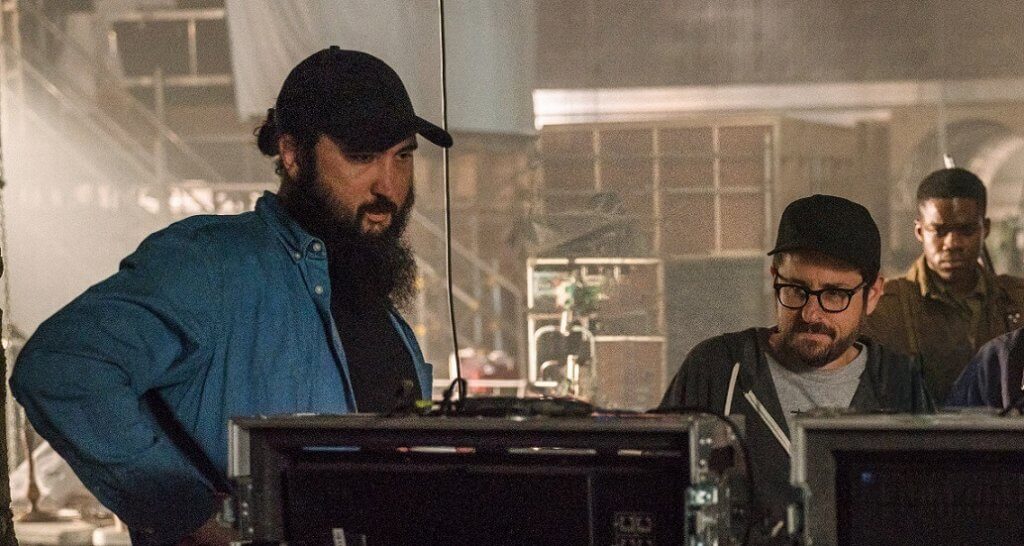 AccessReel: The film just premiered at Fantastic Fest and the reviews coming out for it have been, well, fantastic. How does it feel to get those sort of accolades so far?

Julius Avery: Oh look, it’s lovely just to get the film seen by an audience. You know you work on it for so bloody long, it’s nice to get an audience to see it. And of course Fantastic Fest is full of genre fans and that’s the perfect place for this film to get its launch. You know it was great reaction. You know the fans were coming up afterwards and congratulating us and and telling us we did a good job. And those are the more important reviews. You want the audience to give you a pat on the back and we got a bit of that, so I’m I’m pretty pretty thrilled.

AccessReel: So, obviously you did Son of a Gun and you went into your cave to figure out what the next project was. Bad Robot and J.J. (Abrams). How did that come about? What was it like getting that phone call from them saying, “Come and have a chat?”.

Julius Avery: Bloody ridiculous! I come from a small country town in Western Australia. And here I am getting a phone call saying, “Hey J.J. wants to have a chat.” And of course I was shitting my pants. When I went into the meeting, and I finally met him, he completely put me at ease. You know I was I was completely nervous. He’s really good like that. He sort of empowers you and makes you feel like you know what you’re doing. And when I came and said, “These are my thoughts about what I want to do with the movie.” While this film’s got intense really bonkers, action sci-fi horror, there’s a real heart at the center of it. There’s these really strong characters and I latched onto them. I said I really want to amplify this. I want to make the emotions come alive. J.J. always talks about getting the audience to lean in. And the way you do that is you’ve get to love the characters. You’ve got to love them when they go into hell. Otherwise, there’s no tension, there’s no jeopardy, because you don’t care about these these guys. And that’s even the same with the villain. You can’t have apathy towards villain, he’s got to be a great villain, otherwise you don’t really care about him, either. So we spent a lot of time working it out. And so you know he was a really big advocate for making sure that we had thrills and spills, but you know, what’s what the movie really about? 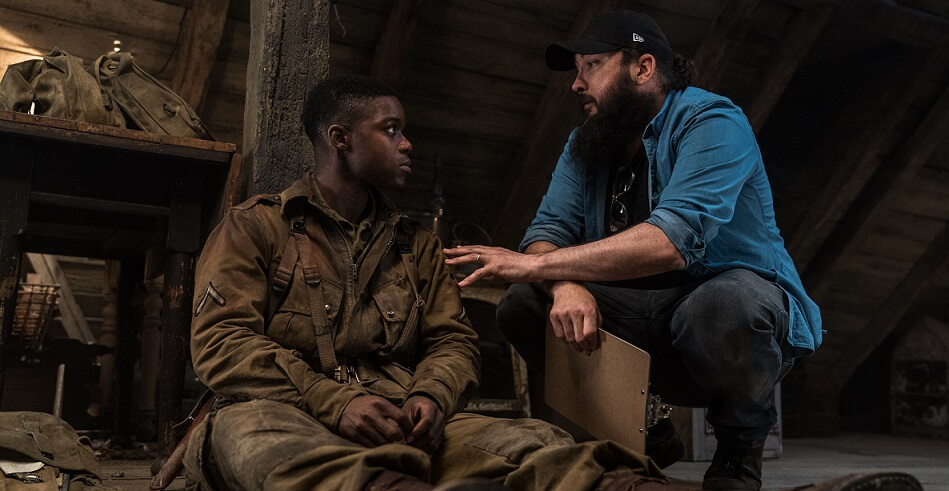 AccessReel: Was there a split second there, when you got that phone call, where you thought. oh shit, he might be calling me about Star Wars?

Julius Avery: (Laughs) I think he’s got that well covered, mate. He doesn’t need my help with that. Obviously he makes big films like Star Trek and Star Wars. The thing about Bad Robot films is expect the unexpected. They take risks, man, they take the familiar and elevate it into something fresh and new, which is cool. Where else do you get to make an R-rated, genre-bending, completely bonkers movie like Overlord? I don’t know any other place where I’d be able to do this.

Julius Avery: It’s a real ensemble cast. I spent a lot time meeting actors and then we did a round of auditioning. We got Jovan, the lead, who plays “Boyce”. I’d seen him in this great movie, Fences, and thought he was pretty amazing in that. So, I brought him in and we had dozens of guys going for that role and they were all great, but for me he was the standout. I mean the guy did this really emotional scene in the audition, he made me cry. I mean I’ve never had that before. He starts off as this really shit-scared kid in the movie and then he rides and becomes a man at the end of it. There’s that vulnerability that that he really had and also, he could then become the hero, and he really had that going for him. And then you’ve got Wyatt Russell, he feels like a born action hero. To me, he’s like he’s like a throwback to the ’80s action heroes that I used to love. Like Bruce Willis in Die Hard. John McClane is completely relatable. He looks like you or me and he threw himself off the side of buildings and took on the bad guys. You loved him and you barracked for him because he wasn’t indestructible. He wasn’t like the new action heroes we have today, who are all built like monsters and they can crash through walls and jump over buildings and it doesn’t ever look like they’re ever going to die. So I don’t care about them. He has that. And Wyatt also has a vulnerability about him as well which I really loved. He also used to play ice hockey professionally and he can take all the hard knocks. He knows what it’s like get a broken nose. He knows what it’s like to be in a fight. He’s the real deal.

AccessReel: Going from Son of a Gun which which you could probably say is a relatively small is indie film to Overload. What was the biggest difference from a film shot in Perth, to a big film shot in London?

Julius Avery: Obviously there’s bigger budgets, there’s more pressure, there’s more people watching. But the basic principles of filmmaking are the same. You’ve got a bunch actors, you put ’em in a room and you set up a camera and you shoot it. It’s the same thing. Then on top of that, you get all that more money and time to do cool action sequences. And there’s plenty of that in the film. But again what was important to me was making sure that we had great character development. That was really similar to my experience with Son of a Gun. We had a lot of action in that movie but we invested the time to to really know these characters and root for them or not root for them. It’s the same type of thing. It’s a bit more pressure, more money involved and obviously a lot more eyes on you. 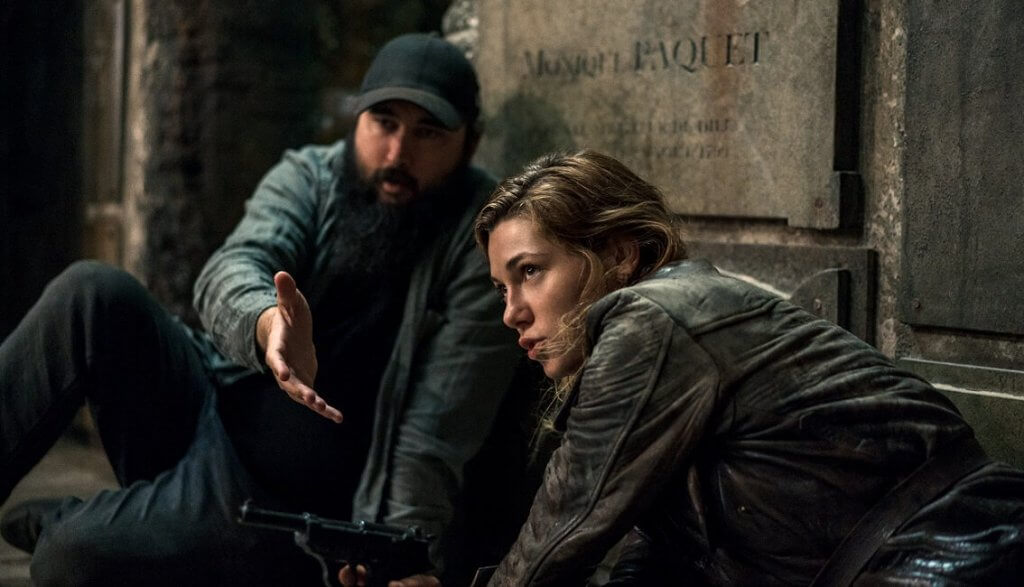 AccessReel: Are you starting to look at anything else yet?

Julius Avery: I’ve got another film with J.J called The Heavy, it’s a subversive take on a super hero movie. I can’t tell you anything about it, but it’s it’s it’s really cool. We’re going to be shooting some time next year and it’s good to be working with the people who I have got to love and know really well.

AccessReel: Thanks, Julius. See ya, mate.