Larry Kane was the only broadcast journalist to travel to every stop on the Beatles’ 1964 and 1965 American tours he also managed to see THE BEATLES live in concert over 50 times. Larry was also with THE BEATLES through some pivotal moments in the bands history. We were lucky enough to have a chat to the broadcast legend whos been in the industry for over 50 years and as you can hear from the interview he still loves to talk about THE BEATLES over 40 years later. 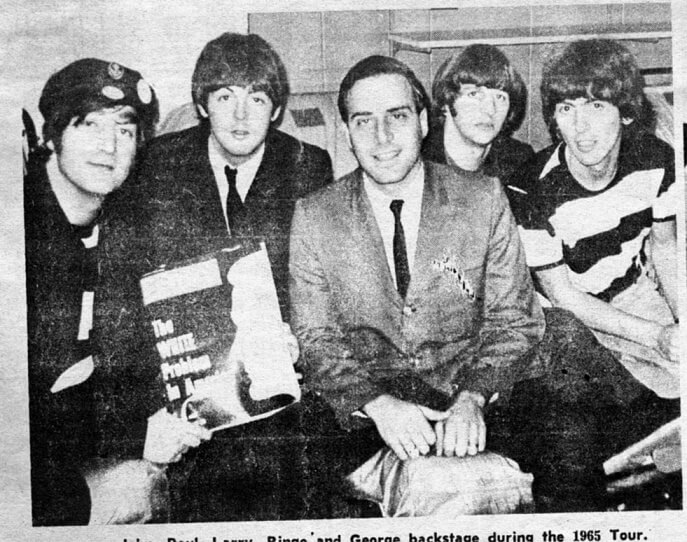 After their now-legendary North American debut on “The Ed Sullivan Show” in 1964, The Beatles transfixed the U.S. and the tremors were felt worldwide, transforming music and pop culture forever with their records and television appearances. The Beatles’ extraordinary musicianship and charisma also made them one of the greatest live bands of all time. In The Beatles: Eight Days a Week – The Touring Years, Oscar®-winning director Ron Howard (A Beautiful Mind, Apollo 13) explores the history of The Beatles through the lens of the group’s concert performances, from their early days playing small clubs in Liverpool and Hamburg to their unprecedented world tours in packed stadiums around the globe from New York to Melbourne to Tokyo.

The first feature-length documentary authorised by The Beatles since the band’s breakup in 1970, Eight Days a Week features rare and never-before-seen archival footage of shows and interviews, plus new interviews with Paul McCartney, Ringo Starr and numerous prominent observers. The film captures the exhilaration of The Beatles’ phenomenal rise to fame as well as the toll it eventually took on the band members, prompting them to stop touring altogether in August 1966 and devote their prodigious musical energy to the series of ground-breaking studio recordings for which they are best known today.

THE BEATLES: EIGHT DAYS A WEEK THE TOURING YEARS is now in cinemas for a limited time only. Check out the trailer below and hit play on the audio player to listen to the interview.