KoRn fans rejoice! The documentary LOUD KRAZY LOVE is coming to Australia showing exclusively at Event Cinemas from May 15.

On February 22, 2005 Head left the band citing that he had “…chosen the Lord Jesus Christ as his savior, and will be dedicating his musical pursuits to that end.” Further from that in an interview a few years later he explained “I was walking one day, just doing my Rock & Roll thing making millions of bucks, you know success and everything, addicted to drugs and then the next day I had Revelation of Christ and I was like, everything changes right now!” Welch offically rejoined Korn on May 2, 2013 after having a couple of appearances prior to that in a couple of shows from 2012.

See the video below – when Head joined the rest of the band for the first time 7 years.

LOUD KRAZY LOVE, a new documentary that details the harrowing journey of KoRn co-founder Brian Welch will be released exclusively in Australia at Event Cinemas May 15, 2019.

The sound Brian “Head” Welch helped pioneer with KoRn in the early ‘90s provided identity to a generation of misfits and made him a global rock star. Famous, wealthy, and worshipped in the spotlight, an adolescent self-loathing relentlessly haunted him in the shadows – until the day a tiny miracle was born. By the time he walked out on a $23M record deal in 2005, desperate to kick a devastating crystal meth habit, all he wanted was to become a good father.

LOUD KRAZY LOVE follows the experiences of Brian and his daughter Jennea growing up together with chaotic courage and unconventional faith. Far beyond a rock documentary, this fearless coming-of-age story grapples with teenage depression, the quest for identity, and the hope of a father willing to do anything for the one he loves.

Here’s a couple of images of Head from Soundwave Perth 2014 – which was taken by one of our Photographers. David Jo Bradley 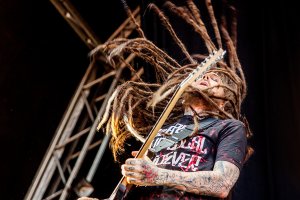 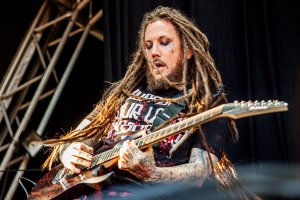