Perth movie-lovers, as Christmas rolls towards us with surprising speed and agility, there is no better time to get to the Luna Outdoor Cinema on Oxford Street, Leederville. Take some time out to ground yourself, under the stars while you watch stars of the silver screen (geddit?) Check out this week’s program. For further details or purchasing tickets hit the link. 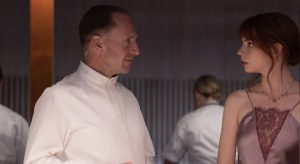 A 12-acre self-contained farm-to-table paradise, Hawthorne Island represents the pinnacle of exclusive eats, serving celebrities and billionaires who think nothing of forking out $1,250 a head. The outliers in this evening’s clientele are Tyler (Nicholas Hoult), a devout foodie pilgrim, and his date, Margot (Taylor-Joy), a layperson along for the free meal. Once seated before Hawthorne’s open-concept kitchen, they are welcomed by Chef (Fiennes), who precedes each course with a monologue. He instructs them to taste, rather than eat. And absolutely no photos: the true beauty of food, Chef explains, lies in its ephemerality.

Among the guests are a washed-up movie star (John Leguizamo), a tastemaking restaurant critic (Janet McTeer), and a trio of tech bros. What they all have in common are meaty secrets that each new dish hints at exposing. Only Margot seems immune to Hawthorne’s menu of manipulation — and only she seems able to spot the vulnerability concealed beneath Chef’s cultivated air of superiority.

Written by Seth Reiss and Will Tracy, The Menu is loaded with wild twists enhanced by Mylod’s playfully ominous camerawork and inventive intertitles. As this foodie fantasy gradually transforms into a culinary nightmare, we come to savour the film’s brilliantly sinister pairings of status and guilt. 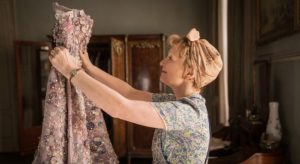 Directed by Anthony Fabian, Mrs Harris Goes to Paris is a revitalised telling of the 1992 film of the same name starring Angela Lansbury and Omar Sharif, and based on Paul Gallico’s novella Mrs. ‘Arris Goes to Paris.

Mrs Harris Goes To Paris tells the story of widowed cleaning lady, Ada Harris (Lesley Manville), in 1950s London who falls in love with a couture Dior dress, and decides that she must have one of her own. After she works, starves and gambles to raise funds to pursue her dream, she embarks on an adventure to Paris which will change not only her own outlook but the very future of the House of Dior.

Mrs Harris Goes To Paris is in partnership with the House of Dior, with support from the National Film Institute of Hungary. 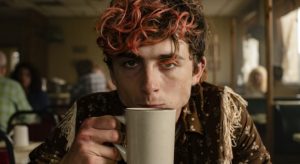 Academy Award-nominated director Luca Guadagnino (Call Me by Your Name, Suspiria) reunites with Academy Award nominee Timothée Chalamet (Call Me by Your Name, Dune) for ‘sickeningly brilliant’ and deeply romantic drama Bones And All. The film also co-stars Taylor Russell (Waves) alongside Chalamet who delivers a mesmerising performance as the other half of the loved-up carnivorous duo.

A story of first love between Maren (Russell), a young woman learning how to survive on the margins of society, and Lee (Chalamet), an intense and disenfranchised drifter, as they meet and join together for a thousand-mile odyssey which takes them through the back roads, hidden passages and trap doors of Ronald Reagan’s America. But despite their best efforts, all roads lead back to their terrifying pasts and to a final stand that will determine whether their love can survive their otherness.

Bones and All marks a triumphant return from Guadagnino that excels as a tender romance despite its often difficult-to-stomach visceral gore and subject matter. Much of the credit for the film’s ability to grip the audience should also be given to the immense talent and frenetic chemistry between Chalamet and Russell who are magnetic as the central cannibalistic couple. 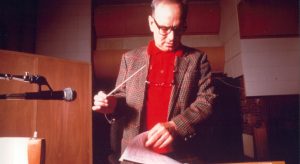 An in-depth look at the life and career of the maestro Ennio Morricone by friend, collaborator and fellow Academy Award Winner Giuseppe Tornatore.

From Oscar-winning director Giuseppe Tornatore (Cinema Paradiso), Ennio – The Maestro celebrates the life and legacy of the legendary Italian composer Ennio Morricone. Revolving around an interview between Tornatore and Morricone recorded shortly before his death in 2020, aged 91, Ennio – The Maestro is a “fantastically entertaining deep dive” on one of the world’s most famous composers, whose discography exceeds a mindblowing 500 soundtracks.

Skillfully weaving through interviews and footage of Ennio’s star studded filmography and collaborators, including Bernardo Bertolucci, Dario Argento, Oliver Stone, Clint Eastwood and Quentin Tarantino, Ennio – The Maestro spans Ennio’s early career in TV commercials and pop music, his iconic work Leone’s Spaghetti Westerns and Argento’s Giallo films all the way to Hollywood, which saw the master composer find mainstream success working with the likes of John Carpenter (The Thing), Brian De Palma (The Untouchables) and Quentin Tarantino (The Hateful Eight) An intimate look inside the musical genius that was Morricone, Ennio intimately recounts details and inspirations behind his most beloved works. Leaving viewers with dozens of films to add to their watchlist, Ennio – The Maestro is a must for all cinema and music fans alike. 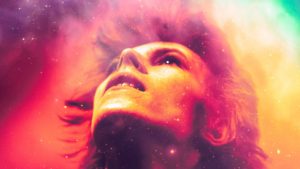 From Oscar-nominated filmmaker Brett Morgen, director of Cobain: Montage of Heck, and featuring never-before-seen concert footage, Moonage Daydream is an immersive cinematic experience; an audio-visual space odyssey that not only illuminates the enigmatic legacy of David Bowie but also serves as a guide to living a fulfilling and meaningful life in the 21st Century.

Moonage Daydream is not a documentary. It is a genre-defying cinematic experience based on one of the most iconic and global rock stars of all time, destined to be one of the defining cultural moments of the year. The film has the full support of Bowie’s estate and features many of his greatest tracks, as well as previously unseen concert footage. 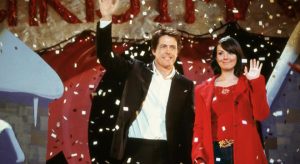 All of London is in love – or longing to be – in Four Weddings and a Funeral writer Richard Curtis’ first directorial effort. Billed as “the ultimate romantic comedy,” LOVE ACTUALLY involves more than a dozen main characters, each weaving his or her way into another’s heart over the course of one particularly eventful Christmas.

The seemingly perfect wedding of Juliet (Keira Knightley) and Peter (Chiwetel Ejiofor) brings many of the principals together, including heartsick best man Mark (Andrew Lincoln), who harbors a very unrequited crush on Juliet. There’s also recent widower Daniel (Liam Neeson), trying to help his lonely stepson Sam (Thomas Sangster) express his true feelings to a classmate. Across town, devoted working mother Karen (Emma Thompson) tries to rekindle the passion of her husband, Harry (Alan Rickman), who secretly pines for a young colleague of his.

In the same office, the lonely Sarah (Laura Linney) not-so-secretly pines for a man just a few desks away (Rodrigo Santoro), who returns her affections but may not be able to dissuade her neuroses. Providing the unofficial soundtrack for all of the couples is an aging rocker (Bill Nighy) who just wants to cash in and get laid — but even he might find a meaningful relationship in the most unlikely of places.

Enjoy the Christmas Cheer at the Luna Outdoor.