Continuing our Cinefest Oz Coverage we also got to speak to the Director and one of the stars of The Merger which was up for the film prize.. its about to come out in cinemas.

Mark Grentell was last behind the camera for Backyard Ashes in 2014 this time around hes with The Merger that tells the story of former professional football player Troy Carrington who has returned home to the fictional town of Bodgy Creek after an abrupt end to his sporting career. He is persuaded to coach the hapless local footy team, the Roosters, where he sees an opportunity to recruit refugees from the Regional Support Centre to turn the team’s fate around. What follows is a comedy about a man seeking redemption, a team trying to reclaim victory, and a community coming to terms with the changing face of Australian rural life.

We are also speaking to John Howard who stars in the Merger as Bull Barlow the town Patriarc who doesn’t like all the change going on in his little town.. John has also had starring roles in TV shows such as The Warriors, Packed to the Rafters, Sea Change and on the big screen in Last Cab to Darwin, Mad Max Fury Road and many more.

The Merger opens in cinemas Thursday. 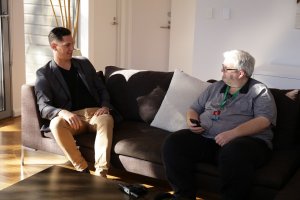