Cowboy Ninja Viking is a film adaptation of the Image Comics comic book series created by A.J Lieberman and Riley Rossmo, which debuted in 2009. The series follows Duncan, a man suffering from multiple personality disorder, who, through a government anti-terror program, is turned into a super-soldier with the abilities of a cowboy, a ninja, and a Viking. The screenplay for the film was originally written by Paul Wernick and Everett David Reese.

MacLaren has directed some of the most successful television series, including Game of Thrones, Westworld, and The Walking Dead. However, she’s yet to direct a feature film, after she turned down Wonder Woman, and her film Nightingale is still in pre-production.

Pratt rose to fame for his role in the television show Parks and Recreation, and has gone on to star in major action and fantasy films including Guardians of the Galaxy and Jurassic World. Pratt returns to our screens in in 2018 for Avengers: Infinity War and Jurassic World: Fallen Kingdom.

Cowboy Ninja Viking is slated for release on June 28th 2019. 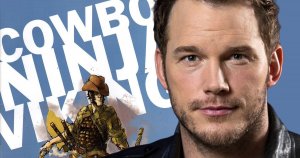