The end of 2010 is now a mere few weeks away, and while there will be the traditional spike in releases as we go into the holiday period including some anticipated films such as ‘Tron: Legacy’, ‘Little Fockers’, and one that I’m particularly keen to see ‘The Kings Speech’, we can start to think about what films we are looking forward to watching during 2011.

Many of the films being released next year don’t have a firm release date attached and obviously schedules can change so the following list is by no means exhaustive, but it contains some of my most highly anticipated releases for next year.

This is director Aronofsky’s follow up to 2008’s emotionally moving ‘The Wrestler’ which proved to be an enthralling character story with excellent performances. ‘Black Swan’ appears to be something of a companion piece to ‘The Wrestler’ with both films exploring the massive demands made on performers of different kinds of art. I find films exploring the origins of talent to be intriguing and ‘Black Swan’ is no different.

From the director of ‘Three Kings’, this has a great cast attached with a story that appears to be emotionally challenging and inspiring. The early buzz appears to be positive, with Christian Bale having gone through another physical transformation for the role similar to his previous efforts in ‘The Machinist’ and ‘Rescue Dawn’. If the script proves to be strong this feels like it could be a moving and uplifting film.

This film wasn’t even on my radar until recently when I watched a trailer at the cinemas, the concept was immediately intriguing as it appears to be exploring the concepts of fate, free-will and how the two are inter-twined. This is George Nolfi’s directorial debut though he is credited with the screenplay for ‘The Bourne Ultimatum’, and a writer on ‘Ocean’s Twelve’. Add an actor of Damon’s quality on top of that you have something definitely worth checking out.

Quite simple the director alone, with previous works including ‘Trainspotting’, ‘28 Days Later ’, ‘Sunshine’ and ‘Slumdog Millionaire’ anything Danny Boyle is involved with is worth taking note of. Lead actor James Franco is also a strong drawcard, in what appears to be a gripping survival story based on actual events.

Fan favourite Zack Snyder’s latest film appears to be a blend of visual effects artistry with a mixture of gothic and steam punk settings, big action sequences and a kick ass attitude. Films like this quite simply don’t come along often, this will be one on the radar of fan boys and girls everywhere. 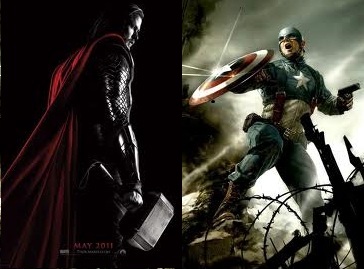 I’ve grouped these two together because they represent the next two chapters in the ongoing Marvel Avengers story arc. Following up from ‘Iron Man 2’, we’ll see the introduction of two more key characters as we slowly edge closer towards ‘The Avengers’. Anyone with a passing interest in comics and comic based film adaptations are likely to see these films, what Marvel is doing is a massive undertaking with this story arc spanning multiple films all building towards 2012.

Anyone who’s read my recent post about impressions from the recent Green Lantern trailer will know this is one release I’m keen to see. At last the DC based line-up of core superhero based films will expand beyond the two iconic characters of Batman and Superman and explore some of the lesser known characters (at least to film audiences) of the DC-Universe.

Being a fan of ‘Eastbound and Down’ and ‘Foot Fist Way’ I enjoy Danny McBride’s cringe worthy and inappropriate comedic performances. The recent red band trailer for this one evoked instant laughs and including some of the cast/crew from ‘Pineapple Express’ this is a comedy right up my alley.

The conclusion to a series of films that began with the Philosopher’s Stone in 2001, we’ve seen these characters grow and develop on screen for the best part of the last decade. A fantastical world of adventure these stories have enchanted millions around the world, and while I’ve never called myself a big fan, I have been watching each film as it was released and after investing so much into this story how could you not be onboard for the final chapter?

A blend of science fiction and western with a skilled cast and director, the recent trailer grabbed my attention being such an interesting idea and fun looking concept. Regardless of the final verdict this promises to be a lot of fun.

No doubt there will be several other releases that I’ve missed that are worth mentioning, but these are the highlights that immediately come to mind. You can look forward to reviews on the above films and more here at accessreel as we move through 2011.