Not only am I incredibly excited about seeing this movie from a film geek’s standpoint I am also enthusiastically curious as a comic fan how Peter Travis’ vision of Dredd will correspond with the classic John Wagner and Carlos Ezquerras’ comic. A new still has emerged that depicts a little more than previous news reports but still not enough to give too much away.

Karl Urban, who is bringing the grouchy Police judge, jury and executioner to life once more, has had his fair share of doubt from the film and comic communities. His good looks and skinny frame made him an odd choice for the gruff and rough enforcer of justice but to be fairly honest Karl looks totally bad- ass in this photo… 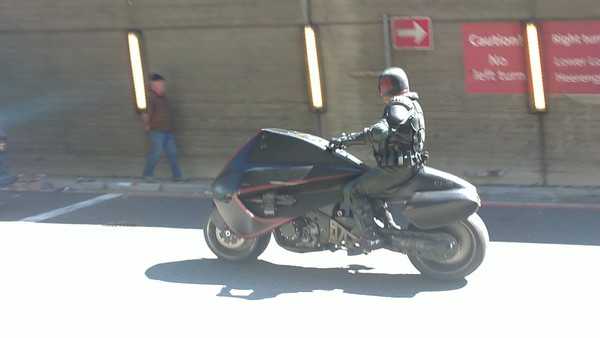 LAWMASTER!! Oh yeah. Although there is admittedly not much to the image, it is still Dredd beefed up in full armour patrolling Mega City on the Lawmaster, so I am still pretty excited.

U.k release date is the 1st of December.