As we head into comic-con this week expect plenty of new details from the worlds of comics, movies and TV to start hitting the net as movie studios, publishers and the TV networks all promote their various projects that are in the works. The Los Angeles Times have released a sneak peak of Odin’s throne room in Asgard from Marvel’s upcoming Thor movie. The image reveals a shot of Thor (Chris Hemsworth) kneeling before Odin (Anthony Hopkins) which you can see below. 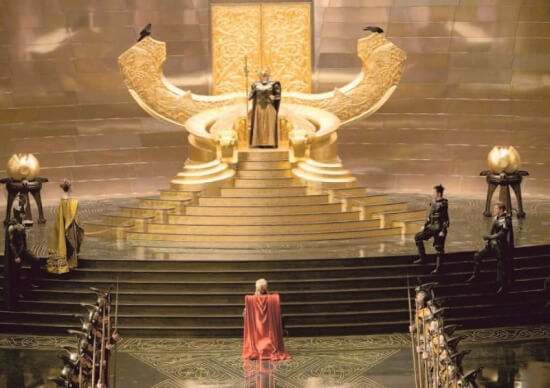 Thor is directed by Kenneth Branagh and also stars Natalie Portman, Ray Stevenson, Kat Dennings and Stellan Skarsgard. Based on the Marvel comic, Thor tells the story of a powerful warrior cast down from Asgard to Earth and forms part of the Marvel series building towards the Avengers film.

Thor is scheduled for a theatrical release in 2011.