Morgan Creek Productions and Skee.TV/Karmaloop.TV have put out an Open Casting call for the upcoming film TUPAC. Directed by Antoine Fuqua who brought us films such as ‘Training Day’, ‘Shooter’ and ‘King Arthur’ is looking for the right person to “embody tupac” on the website it gives you guidelines of whats required and how to submit your application. This would be quite the story I would like to see, if anyone has seen the movie “Notorious” that came out a couple of years ago this story would definitely be right up next to it.

Straight from the website here is whats required for the application

We are looking for individuals who embody Tupac for this starring role. Applicants must follow the instructions below in order to submit their audition for consideration.

2. Read the scene on-camera. Only the individual submitting the scene should appear in the video.

4. There is a five minute time limit and 100mb limit for each submission. Only one submission per person.

The Monologue for Step 1, is below. 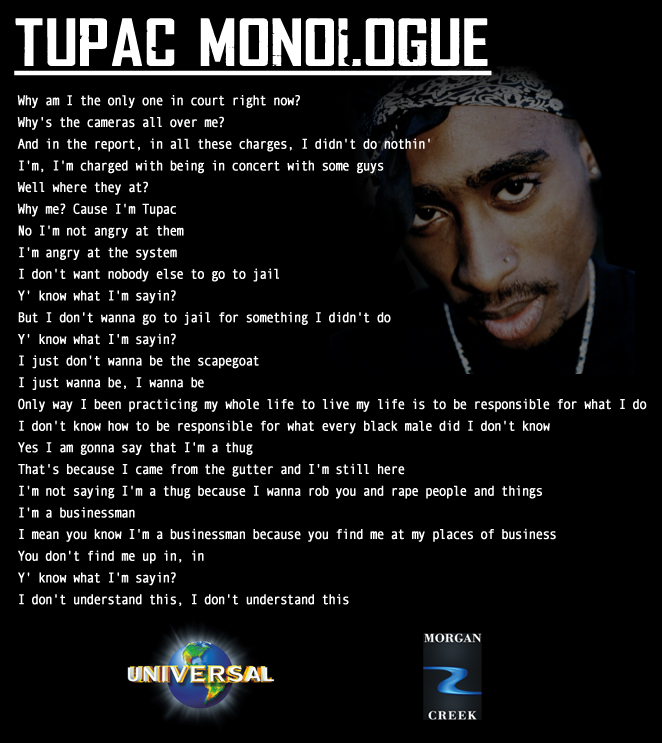 This looks like a quite interesting move on the studios part, I like the fact they are going wide for the search, of the perfect Tupac. For those of you that may not know who Tupac is, heres an excerpt from wikipedia.

Tupac Amaru Shakur (June 16, 1971 – September 13, 1996), known by his stage names 2Pac (or simply Pac) and Makaveli, was an American rapper. Shakur has sold over 75 million albums worldwide,   making him one of the best-selling music artists in the world. In the United States alone he has sold 37.5 million records.  Rolling Stone Magazine named him the 86th Greatest Artist of All Time.

In addition to his career as a rap artist, he was also an actor. The themes of most of Tupac’s songs are the violence and hardship in inner cities, racism, other social problems, and conflicts with other rappers during the East Coast – West Coast hip hop rivalry. Shakur began his career as a roadie and backup dancer for the alternative hip hop group Digital Underground.

In September 1996, Shakur was shot four times in the Las Vegas metropolitan area of Nevada. He was taken to the University Medical Center, where he died several days later of respiratory failure and cardiac arrest.

So if you think you have got what it takes to embody Tupac you should check out this website, In Search of Tupac. Check out one of my favorite songs of his below.