Fox has halted production on Bohemian Rhapsody, the upcoming biopic of Freddie Mercury, due to a “personal health matter concerning [director-producer Bryan Singer] and his family.”

Bohemian Rhapsody, scripted by Anthony McCarten (The Theory of Everything), will follow Mercury and band members Brian May and Roger Taylor, who are serving as producers on the film, from the band’s formation in the 1970’s to Mercury’s death in 1991.

Taylor, the band’s drummer, will be played by Ben Hardy (EastEnders), and May, the lead guitarist, will be portrayed by Gwilym Lee (Midsomer Murders). The film will also feature Joseph Mazzello (Jurassic Park, The Social Network) as bass guitarist John Deacon, and Lucy Boynton (Sense and Sensibility) as Mercury’s lifelong companion, Mary Austin. The director has warned the Bohemian Rhapsody won’t be a biopic in the traditional sense, and that Mercury’s life won’t be the primary focal point of the film, in order to preserve Mercury’s legacy.

The most exciting news about the biopic, however, is that Rami Malek (Mr. Robot) will be playing Freddie Mercury. An early picture of Malek in the role can be seen below: 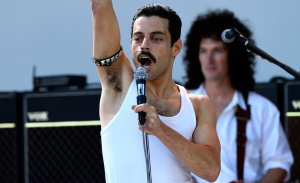 Malek has indicated that achieving a visual similarity to the singer provided him with the confidence to portray the outrageously flamboyant Mercury.

“When you’re able to open your eyes and see a different person staring back at you in the mirror, it’s a very affirming moment,” said Malek.