Warner Bros. Studio has released the concept art for a real-life Gotham city! The studio, in collaboration with Abu Dhabi’s Miral, have been building Warner Bros. World in Abu Dhabi, which will feature a Gotham City world and a Metropolis world, amongst others. According to the concept art below, Gotham City will feature dark alleys, rides reminiscent of Batman villains, such as the Riddler, the Joker and Mr. Freeze, and a constantly dark sky, due to the theme park being entirely indoors. The world definitely looks every bit the crime-ridden city, filled with villains and thrills around every corner. 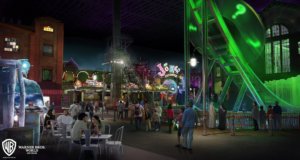 The theme park will also feature a Metropolis world, with its clean streets and towering skyscrapers, and a Warner Bros. Plaza, which is intended to take audiences back to the ‘golden age’ of the studio, surrounded by classically beautiful art deco buildings. Other worlds within the park include Bedrock, Cartoon Junction and Dynamite Gulch, set to be brimming with the seminal Loony Tunes characters and attractions, all beneath a stylised cartoon sky. The ingenuity of having the entire theme park under a single roof, means visitors will be completely immersed in the worlds from floor to ceiling, and everything can be designed to specifically enhance their experience. 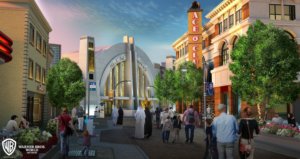 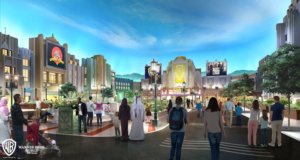 The park, spanning over 1.65 million square feet, is an immense project, made possible only by the 5 500 specialist engineers, workers and craftsmen working on the project. It’s estimated to be costing over $1 billion, and its six unique worlds will feature 29 rides and attractions.

Warner Bros. World Abu Dhabi is situated on the man-made Yas Island, which is already a popular destination due to its golf courses, malls, hotels, and theme parks including Ferrari World, Water World and upcoming Sea World.

Warner Bros. World Abu Dhabi is expected to be ready for its first visitors in 2018, and with the park already 60 percent complete, both Miral and Warner Bros. say the park is on schedule to be completed by the deadline. The park will complete Yas Island’s portfolio of attractions, and will make the island a must-visit destination for people of all ages from all around the globe.