Anyone who has read our review of the recent Total Recall film by Len Wiseman would know we were less than impressed, the film is packed with gorgeous sci/fi eye candy but underpinning it is a lackluster, and incoherent plot which leaves you wondering what the point was to the entire project. So the announcement of the inevitable home release of the film wasn’t something we thought would be particularly of interest however it turns out that there might be something worth checking out afterall.

Sony Pictures Home Entertainment have announced a December release for the film on DVD and blu-ray, with the usual standard fanfare including standard and high definition presentations, 5.1 sound mix, single and two disc version, but the real interesting feature to be included is an extended cut of the film with an approximate 17 additional minutes.

17 extra minutes is no small thing, in a world where Green Lantern can be considered to have an extended cut due to two minutes of additional footage. An extra 17 mins does have the potential to significantly alter, expand, and even improve the film and is reportedly restoring Len Wiseman’s original vision.

The film was originally hacked up in the editing room just prior to the theatrical cut we’ve recently seen, but what impact will it have? Extended cuts have been known to significantly improve a film for example Daredevil and Kingdom of Heaven both benefited hugely from their extended cuts, but at the same time a longer cut could add absolutely nothing.

Will Total Recall’s extended cut redeem the film? We’ll have to wait and see, but it’s unlikely to make things worse.

You can check out the US cover art for the home release of the film below. 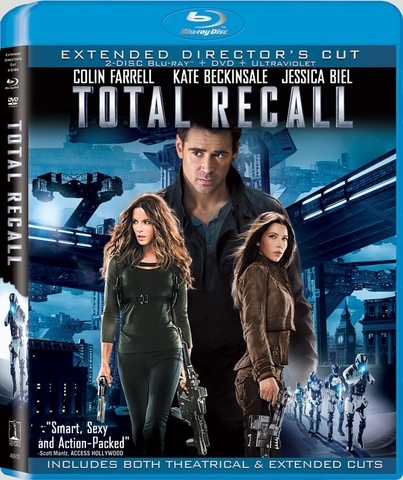