Silence and Suffocation: The Symbolism In del Toro’s ‘The Shape Of Water’

Warning: Contains minor spoilers for The Shape Of Water

If you haven’t seen the film (which you should have because it’s good and also there are spoilers in this article), or if it’s simply been a little while since you have, here’s a quick synopsis of The Shape of Water:

A mute janitor, Elisa Esposito (Sally Hawkins) works at a top research facility in the 1960’s, where a humanoid amphibious creature is held captive. So intrigued by the creature, Elisa befriends it, and eventually the two fall in love. However plans to vivisect the creature to learn its mysterious breathing abilities, spurs Elisa into action to save the creature with the help of her long-time friend and neighbour, Giles (Richard Jenkins), a failing artist. This results in ruthless attempts to track down the missing creature by cruel security officer Richard Strickland (Michael Jenkins).

One of the biggest themes running throughout the film is the idea of completeness and connection. Desperate to save the creature she has fallen in love with, Elisa signs, “when he looks at me he does not know how I am incomplete.” Del Toro noted that this is “the best definition of love I’ve found in my 53 years.” Elisa’s muteness is, in the human world, a deficiency. However, the fish-man, who cannot speak, does not comprehend this and sees her as a complete being. Another recurring symbol is the eggs that Elisa offers to the fish-man. The egg, which is a single cell, represents singularity, and Elisa’s own solitary existence, which she shares with the creature. 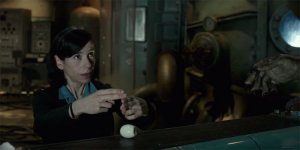 Elisa’s muteness is also an obstacle to communication, and even those around her who understand sign language, like Giles or fellow janitor Zelda (Octavia Spencer), misinterpret some of Elisa’s intentions when relaying her words verbally. In fact, between all the speaking characters, there are problems; Giles misinterprets the words of the man working at the pie shop, whom he lusts after; Zelda notes that her husband never speaks a word of gratitude towards her, and when he finally does speak, he gets her in trouble with Strickland; Strickland covers his wife’s mouth during sex, annoyed by her words. As del Toro notes “all the characters who have the ability to speak have communication problems, but our two non-verbal characters communicate flawlessly.” There is a unique connection between Elisa and the fish-man that revels in the silence between them and doesn’t require speech. As del Toro notes, “words lie, but looks don’t.” 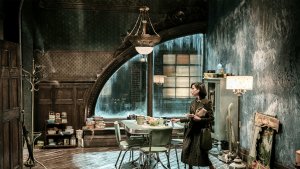 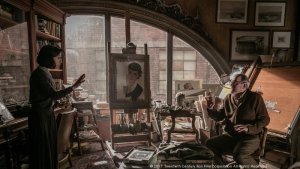 Other important symbols in the film are the colours used in the set design, clothing and imagery. Elisa’s and Giles’ apartments can be considered ‘two halves of a whole’, another sign of completeness when they work together. “Her world is water surrounded with cyan, blues, aged texture and furniture shaped with curves,” says production designer Paul Austerberry, “while his place is bounded by gold and mustard colors to signify warmth and empathy.” The wallpaper in Elisa’s apartment is patterned with Katsushika Hokusai’s ‘The Great Wave’ and fish scales. The colour teal is everywhere – the janitor’s uniforms, Strickland’s new Cadillac, the tiles in the research facility. The colour is as ubiquitous as the symbol of water throughout the film; the boiling water for the eggs, the glass Strickland purposefully knocks over, the increasing rain. In the context of the research facility, the blues are cold, sterile, oppressive and grimy. The loveless setting suffocates the characters within it, much like the way the fish-man, who is brought to the facility in a pressurized iron lung, gasps for breath when removed from the water for too long,  But in Elisa’s home, the blue-greens become oddly romantic and vivid. In opposition to this colour, is the stifling yellow of Strickland’s home. Here, the colour yellow, which usually symbolizing happiness, creates the obviously false illusion of the perfect 1960’s family life, in which Strickland is clearly unhappy. And of course, finally, the colour red, which to del Toro represents “the cinema and love”, is worn by Elisa after she consummates her relationship with the fish-man.  Guillermo del Toro’s injection of rich symbolism in all of his works are what makes his films so deeply meaningful and incomparably beautiful, both in imagery and metaphor.