“Board the Millennium Falcon and journey to a galaxy far, far away in Solo: A Star Wars Story, an all-new adventure with the most beloved scoundrel in the galaxy. Through a series of daring escapades deep within a dark and dangerous criminal underworld, Han Solo meets his mighty future copilot Chewbacca and encounters the notorious gambler Lando Calrissian, in a journey that will set the course for one of the Star Wars saga’s most unlikely heroes.”

Evidently, Solo will follow the backstory of one of the franchise’s most beloved characters, recounting how Han first met Lando, Chewie, and won the Millenium Falcon in a game of sabacc. The film features an all-star cast, including Alden Ehrenreich as the titular protagonist, Emilia Clarke, Woody Harrelson, Warwick Davis, Donald Glover as Lando, and Joonas Suotamo as Chewbacca. Solo is directed by Ron Howard.

The film has overcome some obstacles in its early production, including the firing of the original directors Phil Lord and Chris Miller. While the franchise has spawned numerous weird spinoffs, Solo is the second major one after the reboot of the series in 2015, the first being Rogue One, which was a big hit in the Box Office. The film is slated for release on 24th May this year. 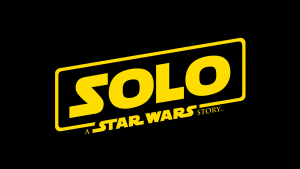