Storm Surfer’s 3D is about to be released Aussie wide with a whole bunch of Special Event screenings happening around the country! With a few happening locally and in country WA.

STORM SURFERS 3D is an epic, character-driven adventure documentary following two best friends on their quest to hunt down and ride the biggest and most dangerous waves in Australia. Aussie tow-surfing legend Ross Clarke-Jones and two-time world champion Tom Carroll enlist the help of surf forecaster Ben Matson and together they track and chase giant storms across the Great Southern Ocean.

Storm Surfers 3D premieres in Sydney on August 14 ahead of Special Event Screenings around the country with guest appearances from the fearless big-wave explorers. Limited release screenings follow in selected 3D cinemas nationally.

Surfing and innovative 3D cinematography converge in this unparalleled documentary following Tom, Ross, Meteorologist Ben Matson, 25 crew and over 1,000 kg of equipment on their mad, high-stakes race against the clock to conquer and film these massive waves, taking viewers on an incredible journey with them.

Storm Surfers 3D Producers Marcus Gillezeau and Ellenor Cox are thrilled with the level of interest both locally and abroad, citing this convergence as a world first.

“It was apparent from the outset that Storm Surfers was going to be a logistically and technically ambitious project, considering the technology required to shoot a surf movie in 3D was non-existent,” said Gillezeau. 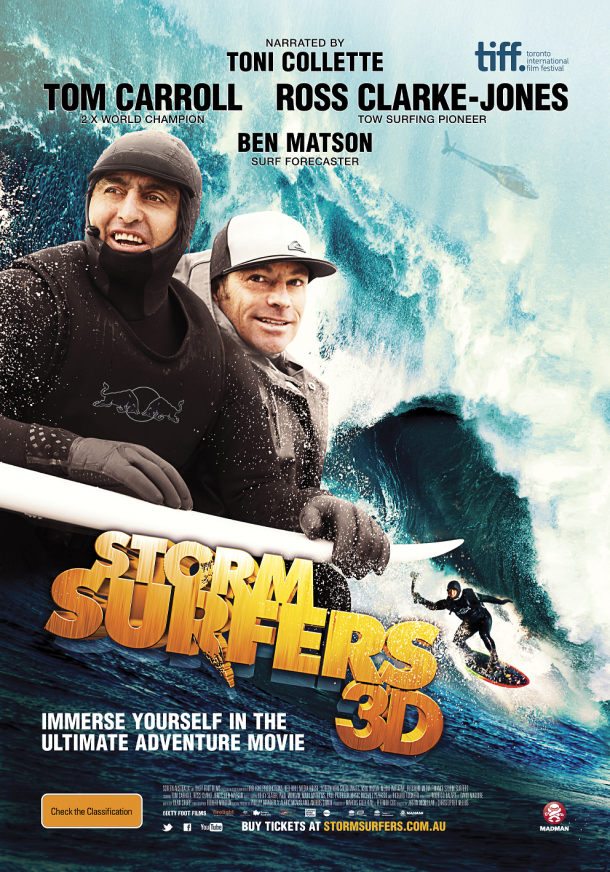 Inspired by a desire to take ‘surf movies’ to a new place, the production team were up for the challenge, capturing over 1500 hours of footage and shooting at the highest 3D ratio, another world first.

Narrated by Toni Collette, with music score by Michael Yerserski and Richard Tognetti, Storm Surfers 3D is an incredible experience – immersing the viewer on a jaw-dropping journey as they ride behind Carroll and Clarke-Jones in a death-defying fifteen-foot wave.

Tom Carroll and Ross Clarke-Jones are going to be attending many screenings across the country and they will be at Ace Cinemas Subiaco on the 5th of September and Ace Cinemas Rockingham on the 6th.

Tickets and more information on the event can be found at http://www.stormsurfers.com.au/ it looks pretty insane so I’m pretty excited to see it!