ASSASSINATION NATION starring Odessa Young, Abra, Suki Waterhouse, Hari Nef, Joel McHale, Bill Skarsgård, Bella Thorne and many more is about to be released on DVD, Blu-ray and Digital in Australia on March 27.  When the film opened in the US/UK late last year, we had a chance to chat to two of the film’s leading ladies, Suki Waterhouse and Hari Nef about the film. (Take a read below.)

This is a thousand percent a true story about how the quiet, all-American town of Salem absolutely lost its mind. High school senior Lily and her three best friends live in a haze of texts, posts, selfies and chats—just like the rest of the world. Their small town gets turned upside down when an anonymous hacker starts to reveal personal messages and the secrets of thousands of people. As anger erupts into full-blown violence, the four girls soon find themselves in a fight for their lives against an armed mob.

Accessreel: I really love the bond that you four women have in the film and the complexities of the story. Hari can you tell me what it was about your character that drew you to want to be involved in the film?

Hari: I found Bec to be badass and I related to the arc she goes on from being somebody who at the beginning of the film participates in the feeding frenzy of judgement and ridicule when the Principal gets hacked to somebody who comes full circle at the end to have mercy and empathy, even for the people who assail her and persecute her. I found that to be inspirational and she kind of embodies the girl I wish I’d been in high school, so it was fun to live out that fantasy.

Accessreel: Social media plays a big part of the film what do you think the positives and negatives are of social media in this current landscape?

Suki: I definitely think I’ve got to see a lot of different peoples perspectives in a way that I wouldn’t have been able to before, so it opens up my landscape. So I’m very grateful for that and a lot of people are capable of nuanced writing and articulating their lives, which are very interesting, so its wonderful for anyone who wants to open up the scope of who you can have in your awareness. 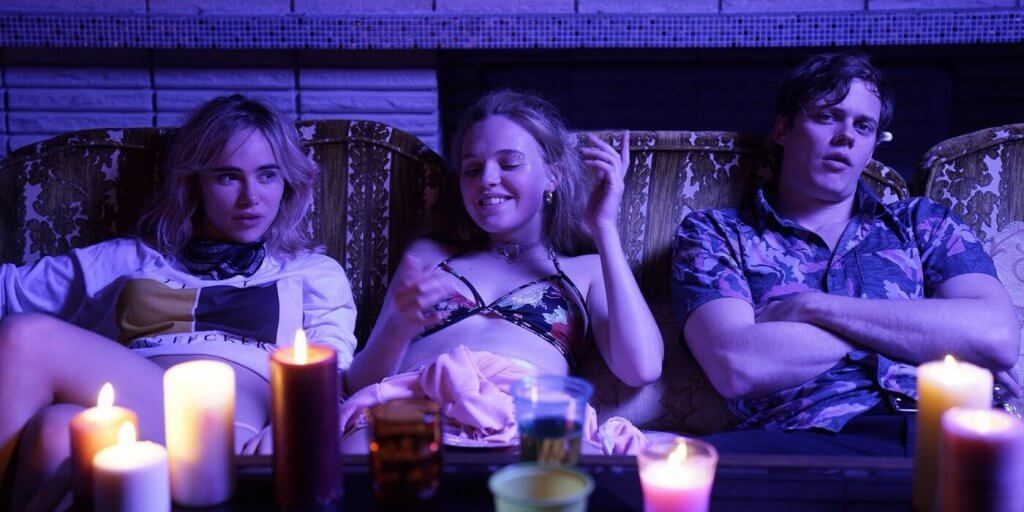 Accessreel: Do you think that younger people have a different idea of what privacy is and that’s a problem?

Hari: I think my relationship to privacy is different because I did grow up on the internet, but I think that I think that there’s probably less anxiety with kids today about you know, delineating private self versus public self but I think there’s more anxiety about how that public self comes across.

Accessreel: This film has a massive shift about half way through – what was your favorite scenes to shoot?

Suki: Sam the director would let us go for like 10-20 minute takes where we were just shit-talking each other and I was like pissing myself laughing. There was a lot of life that came off the page, that we were able have fun with. At the end it felt incredibly cathartic walking down that street with the explosives going off and like all these teenagers coming up around us. It was really amazing and the last scene that we actually shot in the movie.

Hari: My favourite scenes are the ones where we were just sitting around talking smack and those just felt really true to life and were so kind of organic and just really fun.

Accessreel: What was the atmosphere like on set when your shooting those really heavy sequences in the film?

Hari: We were all super focused and supported by the team but I definitely had to push myself outside my comfort zone as an actor and it was some long night-shoots but ultimately I was really gratified by the work. There’s this pool scene they had a stunt double ready for me but I wanted to see if I could push myself to do all the takes by myself so challenges like that I definitely didn’t learn in acting school, but it ended up being super fun and satisfying.

Accessreel: Obviously the characters you to play were already on paper but once you started shooting did it evolve much and did you bring much of yourselves into it?

Suki: Yeah, definitely it kind of unraveled a lot, I felt like an unraveling of myself. This movie made me take like an inventory of my past as well and what it was like for me growing up. Obviously it wasn’t the same circumstances with the way that the internet is now, but they’re not too dissimilar we still all grew up with a spotlight on us.

Hari: I approached Becs very wary of the fact I was playing a teenager and not to push myself to any sort of extremes in order to demonstrate her youth or her inexperience and I feel that teenagers in these sorts of films are quite underestimated and often portrayed in almost an infantilizing way. I wanted to bring a sophistication, worldliness, capabilities and competence to Becs without taking away from the fact that she was still emotionally inexperienced with things like love and rejection. Exploring those contrasts was a fun challenge as an actor and I think that contrast is a salient aspect of kids today. They’re so sophisticated with all this access to information and yet they’re still developing as people, so its an interesting dichotomy to dig into.

Accessreel: How has the general reaction of the film been?

Suki: It really feels like an event when people watch it

Hari: I love when people start cheering, whooping and hollering during action sequences.

ASSASSINATION NATION is available on DVD, Blu-ray and Digital from March 27.