The first teaser for Disney’s live-action remake of Aladdin has arrived and its a little underwhelming… the film is being helmed by Guy Ritchie which is honestly another random choice but I guess lets wait until a full trailer is released before we start smashing anything.

Not much else to say right now, we all know the story and hopefully its done really well. Will Smith dropped the teaser poster on twitter yesterday aswell, he will be playing the Genie in the film. 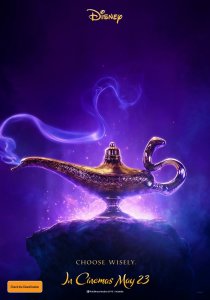 Mena Massoud and Naomi Scott star as Aladdin and Jasmine, respectively with Nasim Pedrad as Dalia and Marwan Kenzari as Jafar.