Damien Leone’s sequel to the 2016 breakout indie horror film, Terrifier, is on the way and here’s what we know so far.

If you are wondering what is Terrifier and why you haven’t heard of it before, rest assured you’re not alone. Although Terrifier has a cult following within the horror community, it’s not as widely known as it deserves to be. 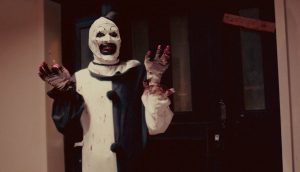 Terrifier introduces Art, a clown whose main aim is to stalk and kill people in the most sadistic way one could imagine on Halloween night. The first installment doesn’t pretend to be anything else other than an intense gorefest set out to delight fans of the genre.

Leone is returning as writer and director of Terrifier 2, alongside David Howard Thorton, who has reprised his role as Art the killer clown. Samantha Scaffidi also returns as Victoria Heyes, joining her will be Lauren LaVera (Iron Fist), Tamara Glynn (Stuck), and Felissa Rose (Sleepaway Camp).

The official synopsis is as follows:

After being resurrected by a sinister entity, Art the Clown returns to the timid town of Miles County where he targets a teenage girl and her younger brother on Halloween night. 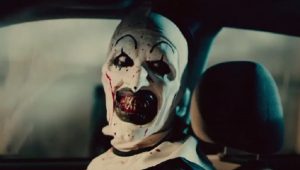 Leone and Thorton have confirmed that Art will have a higher body count with a lot more blood on his hands in Terrifier 2, and if this sequel reaches success then a 3rd installment will happen.

Filming began late 2019 and was set to be released in October this year for Halloween, but due to the Covid-19 pandemic, filming had to be put on hold. Unfortunately, a 2021 release might be more likely at this rate.

The first Terrifier is currently available for streaming on Netflix.