Aussie comic book writer and all round great guy Tom Taylor made a huge impact with his Injustice comic book series at DC Comics. Tom has also been working on creator owned projects including The Deep (alongside artist James Brouwer), which was already in comic form but is making the leap to an animated series. The Deep tells the story of the Nekton family as they explore the depths of the oceans, you can check out the details in the press release attached.

Dive Into The Amazing Animated Series

Premieres on the Seven Network from Monday November 30 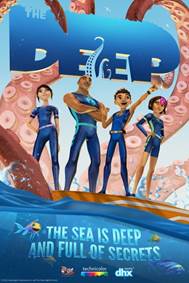 From November 30, kids and families around Australia are invited to adventure into The Deep with the daring aquanauts, the Nekton family!

A truly all-ages show, this unique and stunning underwater animated series premieres on the Seven Network’s 7TWO showing at 7.30am from Monday to Friday. The series will also broadcast on ABC3 in 2016 and is set to roll out globally.

Co-Produced by Australia’s A Stark Production and Canada’s DHX Media,  The Deep is based on the multi-award-winning graphic novel series written by Tom Taylor, illustrated by James Brouwer and Published by Gestalt Publishing.

Melbourne-based writer, Tom Taylor, is the co-creator and lead writer of the series. He is a #1 New York Times best-selling comic book author, screenwriter and playwright, well known for his many STAR WARS works and the worldwide #1 bestselling comic series, INJUSTICE: GODS AMONG US.

Taylor has spent the last year writing a critically acclaimed run of Marvel’s flagship superhero, IRON MAN, and has been announced as the next writer of BATMAN/SUPERMAN for DC Comics, and WOLVERINE for Marvel.

Brisbane-based Illustrator, James Brouwer (Justice League Beyond), is the co-creator and Art Director of the series in which his beautiful vision and incredible designs come to life.

Avrill Stark, CEO of A Stark Production and Australian Producer of the show said, “The Deep is a spectacularly entertaining series.

The characters draw us into their irresistible world of wonder, mystery and adventure. It’s an honour to be working with such a talented team and great partners”.

Niki Hamilton at the Seven Network is also an executive producer on the program. Ms Hamilton said, “The Deep’s stories are multi-layered with themes and humour that will engage children and adults alike.

This is truly family viewing and we are thrilled this classy animation will premiere on the Seven Network.  Our involvement underlines the network’s ongoing commitment to the commissioning of great content”.

SYNOPSIS – THE SEA IS DEEP AND FULL OF SECRETS

More people have set foot on the moon than have journeyed to the very bottom of the sea – but that’s where the Nektons dare to go.

While most explorers look to space, our heroes know that an infinite number of mysteries lie deep in the darkness below.

A brilliant team with advanced technology and an unquenchable thirst for discovery, the Nektons boldly explore this spectacular final frontier here at home in their immense state-of-the-art submarine, the Aronnax.

The youngest Nekton, Ant, a witty inventor, is the most passionate and impulsive about unlocking secrets. His older sister, the artistic, Fontaine, shares his sense of wonder, and lends rationality when Ant touts his latest wild theory. Their differences sometimes hinder and sometimes complement each other, but either way, life on the Aronnax is never dull.

Their parents, gentle giant and oceanographer, Will, and marine biologist and skilled pilot, Kaiko, are passionate deep sea explorers and encourage their children’s enthusiasm and fascination for the mysteries lurking beneath the waves. Ant’s pet fish, Jeffrey, joins them for the ride… and often steals the show.

On their travels the Nektons discover mythical wonders, perform rescues on (and in) the high seas, cross paths with villainous pirates, encounter mysterious figures, and come across sea creatures and monsters never before seen by mankind.

Using their fantastic deep sea vehicles, specialized mech suits and other cutting-edge technology, the Nektons will discover places, artifacts and creatures that long ago vanished into myth. Secrets are rising from the depths. But why? And why now?