The Reckoning in cinemas this week!

Filmed in Perth by John V. Soto, the new film The Reckoning is opening in theatres this week. An aussie crime thriller starring Liam Hemsworth, you can check out the details on the full page.

THE RECKONING is local filmmaker John Soto’s thrilling new film that opens this week at Hoyts Garden City and Carousel (sessions this weekend 5-7 September, and next weekend 12-14 September), with all tickets the special price of $15 across the board.

The film is receiving great response from reviewers around the country:

“The Reckoning is a well-structured and fast-paced crime thriller, utilising all the classic elements to deliver a suspenseful and spine-chilling film.” – Mark Morellini, Alt Media

Shot in Perth,  the psychological crime drama stars Jonathan LaPaglia as Robbie Green, a detective called in to investigate the roadside execution of his colleague Jason (played by Luke Hemsworth).  When he arrives at the crime scene he discovers a data card from a video camera containing footage shot by two runaway teenagers (Hanna Mangan-Lawrence and Alex Williams) who are making a documentary about the drug-related death of a sibling. With the help of colleague Jane Pearson (Viva Bianca) Robbie retraces the teen’s journey and soon begins to uncover a trail of the dead that leads all the way back to police headquarters, which leads to a trail of revenge played out.

The Reckoning will have its premiere tonight at Hoyts Garden City, followed by an encore premiere sneak preview tomorrow night, to be attended by cast and crew.

See below for details of screening times, locations and cheap tickets! 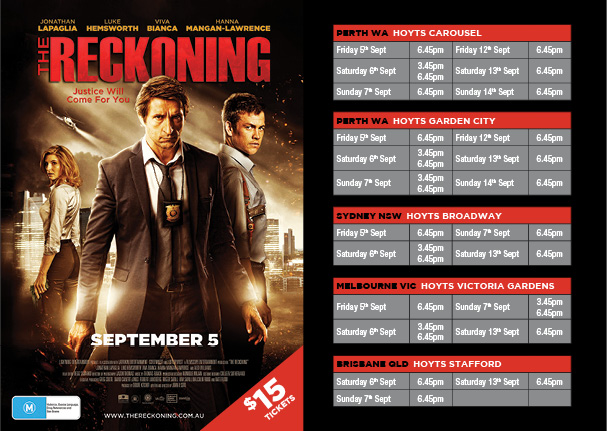