Perth movie-lovers, the nights are drawing in, stone fruit is becoming rare in the grocery section and soon, watching a movie outdoor under the glittering night sky will not be possible. So, take advantage of these excellent films at the Luna Outdoor. For further details or purchasing tickets hit the link. 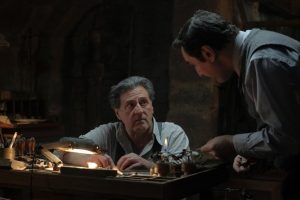 The legendary Daniel Auteuil gives one of his most superlative screen performances in the gripping new film from writer/director Fred Cavayé, based on the celebrated, multi–Molière Award-winning play.

Occupied Paris, 1941: Jews are instructed to identify themselves by wearing a yellow star. Jeweller Joseph Haffmann (Auteuil), fearing the worst, arranges for his family to flee the city and offers his employee François Mercier (Lellouche) the chance to take over his store until the conflict subsides. But his own attempts to escape are thwarted, and Haffmann is forced to seek his assistant’s protection.

It’s a risky proposition for both men, and one that Mercier’s wife Blanche (a wonderful Sara Giraudeau) is sceptical of. As the couple move in to the Haffmann home, the agreement turns into a Faustian bargain that will forever change the fate of all…

Cavayé masterfully guides the viewer through the world of Vichy France, where lives are irrevocably shaped by the twin scourges of war and the black market. Rich in moral complexity and empathy, with several twists too good to spoil, this is a must-see. 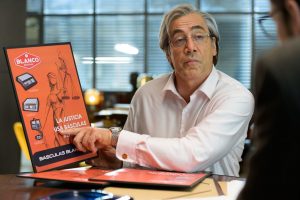 A piercingly clever comedy from Spain, featuring Academy Award winner Javier Bardem at the top of his game.

Blanco (Bardem), the charismatic owner of a family-run factory, is under pressure as he covets a local award for business excellence. Everything needs to be perfect! But the veneer of the perfect company cracks as Blanco has to deal with a vengeful fired worker, a depressed supervisor, and an infatuated ambitious intern. To win the competition, the manipulative “good boss” shamelessly meddles in his employees’ private lives and crosses every line imaginable, unknowingly starting an explosive chain reaction with wild consequences. 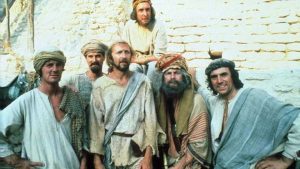 Welcome to Luna’s annual screening of Life Of Brian, they see this as a fitting way to bring people together to have a bit of a laugh on Easter Sunday in the Luna Outdoor. Monty Python delivers a scathing, anarchic satire of both religion and Hollywood’s depiction of all things biblical with their 1979 all-time classic Life of Brian. The film starts at 7.30 pm

Highly controversial upon its original release and banned in several countries, the film is now frequently ranked as the greatest comedy feature of all time by magazines and media outlets around the world.  As Monty Python member Terry Gilliam says, “It rips bare and makes you laugh at the world we’ve created for ourselves.” 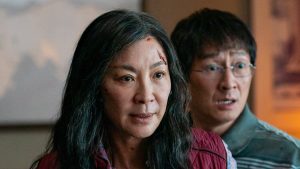 From A24 comes Everything Everywhere All At Once,  a mind-melting wild-looking explosion of fun that is delightfully bonkers!This mind-bending new film from directing duo Daniel Kwan and Daniel Scheinert (aka. Daniels), a follow-up to Swiss Army Man,  is about an ageing Chinese immigrant, Evelyn Wang (Michelle Yeoh), who can’t finish her taxes. This science-fiction feature drops us into a multiverse fever dream where Evelyn simultaneously exists in infinite realities. Alongside co-stars, Stephanie Hsu, Ke Huy Quan, Jenny Slate, Harry Shum Jr., James Hong, and Jamie Lee Curtis, one woman is tasked with saving the world.

This kaleidoscope adventure is accompanied by a soundtrack from Son Lux, and collaborations with Mitski, David Byrne, André 3000, Randy Newman and Moses Sumney across 49 thumping tracks.

We recommend you don’t miss the Daniels zany, idiosyncratic, hilarious and big-hearted sci-fi action-packed escapade.  Feast your googly eyes on Evelyn as she explores thousands of alternate lives she could have lived. 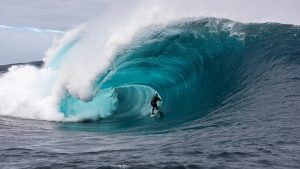 Facing Monsters digs deep into the psyche of enigmatic West Australian ‘slab wave’ surfer Kerby Brown, a man whose connection with the ocean runs as deep as his love for his family. This film is far more than just a surfing story. It’s an unapologetic musing into the essence of Kerby and his family as we join them on his quest to ride a ferocious slab wave in the deep Southern Ocean that no one on the planet has surfed before. It’s a film about fear, addictions, and family bonds as we explore what drives Kerby, what anchors him and why he’s obsessed with pitting himself against one of nature’s most intimidating forces.

Directed by Bentley Dean (Contact, Tanna) and produced by Chris Veerhuis (Red Dog: True Blue, Breath) along with executive producers Frank Chidiac, Susanne Morrison and co-producer Sonya Rifici, this suspenseful, action-packed drama unravels Kerby’s inner demons whilst confronting the real-world consequences that his death-defying passion could have on his family. 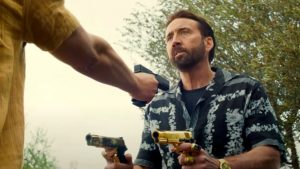 Nicolas Cage stars as Nicholas Cage in the action-comedy The Unbearable Weight Of Massive Talent. Creatively unfulfilled and facing financial ruin, the fictionalised version of Cage must accept a $1 million offer to attend the birthday of a super fan (Pascal). When things take a wildly dangerous turn, Cage is forced to live up to his own legend, channelling his most iconic and beloved on-screen characters in order to save himself and his loved ones. With a career built for this very moment, the Academy Award® winning iconic actor must take on the role of a lifetime: himself.

The actor’s new comedy, The Unbearable Weight of Massive Talent, currently has a rare 100 per cent critics‘ score on aggregator site Rotten Tomatoes.

The Hollywood Reporter’s John DeFore called it “a romp aimed at cultists who have sought out the Crazy Cage performances and forgiven the misfires in between.” Variety’s Owen Gleiberman dubbed it “A commercial comedy that has a deliriously good time poking fun at Nicolas Cage, celebrating everything that makes him Nicolas Cage — and, in the end, actually becoming a Nicolas Cage movie, which turns out to be both a cheesy thing and a special thing.”