This Week at the Luna Outdoor (29th Jan–5th Feb)

Perth movie-lovers, January passes into February and the best place to view brilliant, moving and innovative cinema under the night sky, is still the Luna Outdoor Cinema on Oxford Street, Leederville. Check out this week’s program. For further details or purchasing tickets hit the link.

Pedro Almodóvar returns, following his triumphant Pain and Glory, with a dramatic tale of motherhood and historical trauma starring Penélope Cruz. Cruz, winner of the Best Actress prize at Venice 2021, is fantastic as Janis, a photographer who accidentally becomes pregnant through a relationship with a married forensic archaeologist. While in hospital, about to give birth, she meets Ana (Milena Smit), a traumatised adolescent who is terrified about her pregnancy. Though in very different situations, Janis and Ana form a bond that has a dramatic impact on their lives.

In returning to his recurrent theme of mothers, Almodóvar delves into Spain’s traumatic past, showing an intense connection between the personal and the political. The craft is of course distinctively Almodóvar’s, and the gorgeous visuals combined with deep emotion make this a very welcome return into his world. 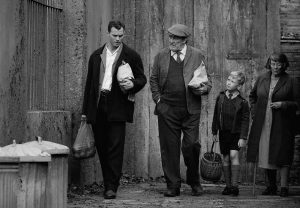 In his three decades of filmmaking, Kenneth Branagh has ushered us into Henry V’s campaign at Agincourt, Thor’s celestial chambers on Asgard, and murderous intrigues aboard the Orient Express. Branagh’s latest work unfolds in a much more real-world and familiar setting for the prolific actor, writer, and director. Named after the city of his birth, Belfast is Branagh’s most personal — and most affecting — film yet.

A coming-of-age drama set during the tumult of late-1960s Northern Ireland, the film follows young Buddy (Jude Hill) as he navigates a landscape of working-class struggle, sweeping cultural changes, and sectarian violence. Buddy dreams of a glamorous future that will whisk him far from the Troubles, but, in the meantime, he finds consolation in his charismatic Pa (Jamie Dornan) and Ma (Caitríona Balfe), and his spry, tale-spinning grandparents (Ciarán Hinds and Judi Dench).

Its story is rooted in blood ties, Belfast is also a family affair behind the scenes, as Branagh reunites with many long-time collaborators, such as production designer Jim Clay, director of photography Haris Zambarloukos, and editor Úna Ní Dhonghaíle. Together they’ve crafted a film that is characteristically meticulous in its evocation of a particular place and time, while Branagh’s superb cast fills every scene with energy, idiosyncrasy, and heart.

Just Announced: The cast of Kenneth Branagh’s Belfast, including Caitriona Balfe, Jamie Dornan, Ciarán Hinds and Judi Dench, will follow young Jude Hill’s lead on the road to the Academy Awards. Variety has learned exclusively that Focus Features will campaign Hill for lead actor consideration during the awards season, with the rest of the cast going for supporting recognition.