Here’s the first trailer for the horror flick SLENDER MAN, I don’t think the trailer is really that creepy at all.. and well it should be, for those who have no idea about what Slender Man is here’s a brief history.

The Slender Man is a fictional supernatural character that originated online back in 2009. It is depicted as a thin, unnaturally tall man with a featureless head and face, wearing a black suit. 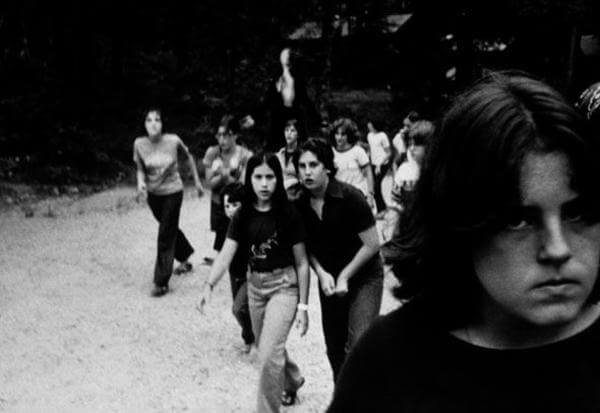 One of the original Slender Man images – you can see him in the background.

Stories of the Slender Man commonly feature him stalking, abducting or traumatizing people, particularly children. The Slender Man is not confined to a single narrative, but appears in many disparate works of fiction, typically composed online. Fiction relating to the Slender Man encompasses many media, including literature, art and video series such as Marble Hornets. Outside of online fiction, the Slender Man has had impact on popular culture, having been referenced in the video game Minecraft and generated video games of his own, such as Slender: The Eight Pages and Slender: The Arrival. (thank you wikipedia, you made my life easy)

Beginning in 2014, a minor moral panic occurred over the Slender Man after readers of his fiction were connected to several violent acts, particularly a near-fatal stabbing of a 12-year-old girl in Waukesha, Wisconsin.. which is currently being tried in court.

There’s been a few documentaries made about the subject one titled “Beware of the Slenderman” which is worth checking out if you are interested in finding out more.

The official synopsis for the film is as follows.

In a small town in Massachusetts, four high school girls perform a ritual in an attempt to debunk the lore of SLENDER MAN. When one of the girls goes mysteriously missing, they begin to suspect that she is, in fact, HIS latest victim.

SLENDER MAN is due for release May 2018.