Vanilla Ice collaborates and listen’s in That’s My Boy

Vanilla Ice is heading back to the big screen in Adam Sandlers new film THATS MY BOY and we have the brand new trailer for you guys to check out his acting chops.

I can still remember Vanilla Ice when he was in the Teenage Mutant Ninja Turtles back in the early 90’s, wasn’t that song just awesome? haha nostalgia! and now hes playing opposite Adam Sandler and Andy Samberg in this big screen comedy. Rumour has it Sandler has bringing back his old school humor after a slate of rather ‘soft’ movies.

Other then Vanilla Ice being in this trailer its great to see the backstory of why Sandler’s character had a baby so young, in a rather hilarious moment! 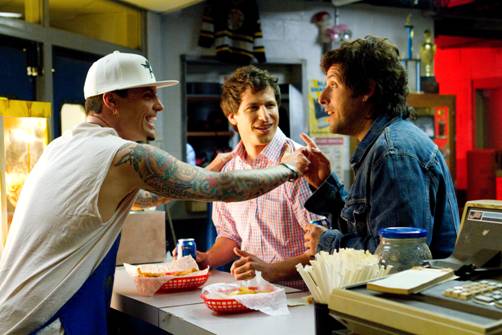 While still in his teens, Donny (Adam Sandler) fathered a son, Todd (Andy Samberg), and raised him as a single parent up until Todd’s 18th birthday. Now, after not seeing each other for years, Todd’s world comes crashing down on the eve of his wedding when an uninvited Donny suddenly shows up. Trying desperately to reconnect with his son, Donny is now forced to deal with the repercussions of his bad parenting skills.

That’s My Boy hits cinemas on the 14th of June