Watchmen on the small screen?

It’s official, there’s a new interpretation of Alan Moore’s graphic novel ‘Watchmen’, in the works with HBO ordering a pilot for a TV series. For anyone who doesn’t know, Watchmen is the comic series written by Alan Moore with art by Dave Gibbons which was released over 1986 and 1987.

Considered by fans and critics alike to be one of, if not the most significant comic story ever written, the release of Watchmen has been dubbed ‘the moment comic books grew up’. The story was eventually adapted to film with the release of the Zack Snyder directed Watchmen in 2009, however it now has a chance of making its way to a HBO TV series, with the network committing to production of a pilot based on the graphic novel.

Lost and The Leftovers veteran Damon Lindelof is involved in the show, he has previously teased fans via his Instagram account with the announcement of work commencing in the writers room on the show. His announcement included the partial reveal of a Night Own statue which you can see below. 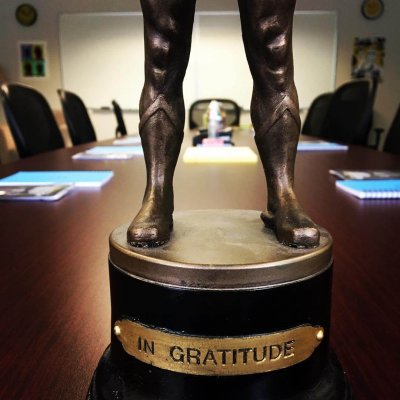 Since the announcement that a pilot is in the works, there has been speculation that this idea won’t be a simple translation of the Watchmen graphic novel that was originally released. It appears that a TV show may look at creating new material, and/or expanding upon existing material that was compressed in the original story, including sub plots outside the main narrative, and spread over different time period.

While there have been additional Watchmen stories released in recent years including the Before Watchmen graphic novels, there’s been no mention if those stories might find their way into a TV series, but if the show is a success that would seem an inevitable outcome.

While pre-production is underway, this is only a pilot at this stage, and even if the project goes into full production it’s unlikely there’d be a first season release before late 2018 or even into 2019, so the Zack Snyder film will be the only onscreen live action Watchmen experience that’s available for a little while longer.