#whywewearblack On the Red Carpet: Celebrities Spread the Time’s Up Initiative

If you managed to watch the Golden Globes live, or have been following the news leading up to and during the awards, you’ll have undoubtedly noticed that many of the celebrities wore black to take a stand against inequality under the Time’s Up initiative. Instead of celebrities being asked who they’re wearing, reporters asked why they were wearing black, giving them the opportunity to spread the foundation’s message. Wearing black was a show of solidarity against the multiple sexual harassment cases that have come to light in Hollywood in recent months. The Time’s Up Foundation was created in order to provide funds towards legal representation for the victims of sexual harassment, discrimination and abuse in the work place.

“We wear black for many reasons,” Longoria said, “One, to support the brave women who have come out with their stories. To those that are still silenced, we are with you.”

Natalie Portman added, “We wear black because we’re looking forward to a new day where the powerful do not exploit others.” 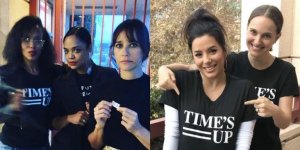