Now that the sun has well and truly set on Zack Snyder’s time with the DC universe (regardless of what happens with a Snyder cut of Justice League, he’s not making anymore movies), we’re starting to see more teasers about his future in film, rather than his past.

Principal photography is currently underway on Snyder’s new film Army of the Dead, a return to the zombie genre. Some of you may recall Snyder delivered a solid remake of Dawn of the Dead back in 2004 before moving onto films with Spartans and superheroes (not in the same film but that could be interesting).

While there was no significant presence for Army of the Dead at this year’s San Diego Comic-con, Snyder did release an image via social media of the main cast in full costume which you can see below. 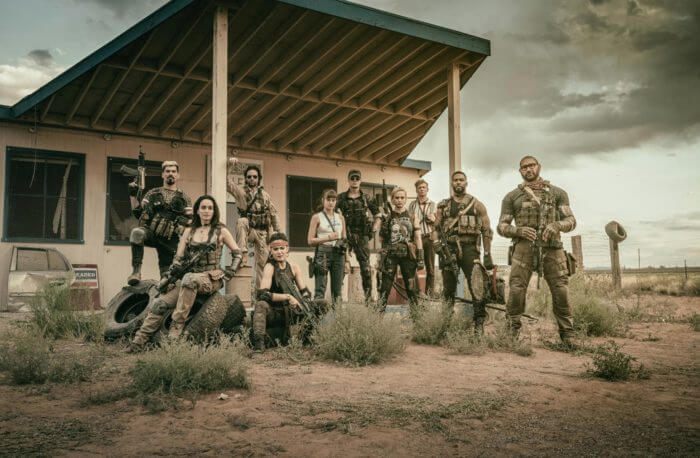 The IMDB synopsis for Army of the Dead reads as follows:

Following a zombie outbreak in Las Vegas, a group of mercenaries take the ultimate gamble, venturing into the quarantine zone to pull off the greatest heist ever attempted.

Reportedly this has been something of a passion project for Snyder who’s been seeking a way to make this film for some time, Army of the Dead is a Netflix Original and will be Snyder’s first feature film since Justice League.  Snyder has previously made comments to say he has full creative control on this project, and that the film that is delivered will be his unaltered vision.

With it now being two years since Justice League, and for better or worse the subsequent shift in vision for the direction of the DC films , it’s more than time for Snyder to move forward with new projects. With this film being lower profile than other recent efforts, he has an opportunity to showcase his film making skills with more creative freedom, it’ll be fascinating to see if he bounces back strong with renewed confidence in this film.