English groomsmen Tom (Kris Marshall), Graham (Kevin Bishop) and Luke (James Helm) have returned to make life difficult for David Locking (Xavier Samuel) the groom from the 2011 Australian comedy hit A FEW BEST MEN (directed by Stephan Elliott). A FEW BEST MEN was the raunchy comedy set in New South Wales’ Blue Mountains where David’s wedding to his bride Mia was obstacled continually by his drunken, drugged-out, womanising friends. There were high jinks with a sheep and Olivia Newton John played a coke-snorting posh Aussie mother-of-the-bride. Rebel Wilson was in there, too, on her way to Hollywood.

A FEW BEST MEN did good business locally and, amused audiences with its energetically crude humour . It had a DEATH AT A FUNERAL vibe which had a lot to do with having the same screenwriter, Dean Craig (he wrote the UK and US versions) and indeed he has re-upped and penned the sequel A FEW LESS MEN.The story begins immediately after the events of the first movie, much as QUANTUM OF SOLACE follows directly on from CASINO ROYALE. For reasons that constitute a spoiler, Luke is sidelined, accidentally killed and the remaining Men have the task of getting him back home to London.

From this point on, Luke is a WEEKEND AT BERNIE’s style presence. They must look after him and are hindered by his literal dead weight every step of the way. The Men come to realise that if they don’t get Luke back to his psychotic cousin, played by Ryan Corr, then they stand a good choice of getting badly hurt. They accidentally go off course and end up in the (Western Australian) outback racing around comedically, trying to locate the body of their friend. Their cross-country adventures take in the sights of the Australian countryside and involve the participation of fine Australian talent such as Lynette Curran, Shane Jacobson, Sacha Horler and Deborah Mailman.

Director Mark Lamprell, who directed GODDESS (2013), the Australian Ronan Keating vehicle, has taken over the reins for this outing. James Helm’s Luke replaces Tim Draxl. Dean Craig’s script covers familiar territory; slapstick, casual sex, fart jokes and drug-taking to name but a few of the vignettes. There are also hippies, cross-dressers, deaf old ladies, angry cops, outback loners and gangsters. The performers are good, the situations and gags triple-tested. A FEW LESS MEN is a road movie where the protagonists are set in their ways and don’t change as a result of their adventures. It works hard to hit the collective funny bone and to equal the laughs of the original. It doesn’t quite get there, but fans of the first may enjoy a return visit with the Men

You can also listen to our interview with Xavier Samuel here. 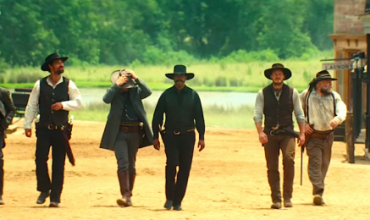