Alex Russell – Only The Brave

Australian actor Alex Russell was born in Brisbane, although these days he lives in Los Angeles. You might have seen him first in the features ALMOST KINGS or WASTED ON THE YOUNG, both made in 2010. Possibly you came across his work in the 2012 sci-fi thriller CHRONICLE or the 2013 remake of CARRIE. He can currently be seen in the intense action-drama ONLY THE BRAVE about the firefighters of Prescott, Arizona known as the Granite Mountain Hotshots. The film stars James Brolin, Miles Teller, Jennifer Connelly and Jeff Bridges. The story is based on a number of incidents including the 2013 Yarnell Hill Fire. Alex plays real-life firefighter Andrew Ashcraft. Darran Price spoke with Alex about the process of making the movie.

Take a listen to the fully interview below, or by all means read the transcription.

Only the Brave is now in cinemas, you can click here to read Phil’s review. 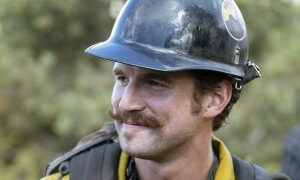 Andrew Ashcraft (Alex Russell) in ONLY THE BRAVE.

It’s an incredible true story and you play a real person Andrew Ashcraft how did you go getting into that character. Did you meet any of Andrew’s family?

I did meet his family, we actually all over the period of time. Most of the families travelled out from Prescott to the movie set in Santa Fe New Mexico which aren’t all that too far apart and we had many families of our Hotshots come out and visit us and support us and talk to us and answer questions and offer opinions and offer criticisms and just generally too my thinking be extremely generous of time and spirit. I’m still connected with Andrew’s mom Debra we still text she texts me every Monday which I’m grateful for, she’s a beautiful woman and she reminds me of my mother.  I’ve never been surrounded by that much by that large amount of a reminder of death and life’s fragility and how beautiful people can be taken from us. I’ve never had such a large amount of that all at once such a concentrated amount and I have to tell you it was not just a movie for us, this was this was not just shooting a movie. This was a really deep human experience with beautiful people where we had a serious responsibility. You know playing anyone who is a real person and who was a good person you know that’s a responsibility unto itself but if they have passed on and then especially if they’ve passed on in a raw and recent context you know it brings a whole other set of responsibilities. So was it was it was invaluable being able to spend time with the families.

When a role like this comes to you obviously you’re looking at it. It’s a true story everyone involved in the production and all the actors they all want to get the film as accurate as humanly possible. What challenges did you face yourself when trying to portray that?

I didn’t have any sort of great videos available to me, I had some and we had some audio and we had a lot of pictures and we had family members to talk to. That’s what we went off of and so I built it around that and I built it around what I was told about him that he was basically always cheery no matter how steep the incline of the slope was or how late in the day it was and how many hours over time they were up to or how much sweat was stinging his eyes there was always a smile on his face. That was a huge entry point for me into who Andrew was to me in how I saw him you’re never going to perfectly be there special energy because we’re all our own special energy and that’s beautiful too, you’re never going to perfectly get that but if you can capture some glimpse of them if you can if you can capture some essence of them that strikes a chord especially within the hearts of people that knew them and makes them feel like that that’s was them that was like them that’s how they would ask if you can do that and then the goal is achieved. I think that it was a huge testament to Ronna Kress the casting director and Joe Kosinski the director and especially Joe with his conviction about finding people who really really looked like their guys and who really really felt like the guys in terms of energy. One of the things that strikes me the most when I watch the film is the credits when it has all of us actors up against the guys that we were fortunate enough to play and some of them are just sort of uncanny Chris McKenzie and Taylor Kitsch who played him are almost interchangeable with the handlebar moustache as you know Jeff Bridges and Chief Duane Steinbrink who hasn’t passed on and who I’m fortunate enough to know and to have made friends with and who was a technical adviser for us you know those guys you know when Jeff Bridges is clean shaven like he is in the film and he hadn’t been clean shaven in a movie since I can’t remember it you know they are almost interchangeable. It’s quite extraordinary so I think that you know it’s a testament to Joe and too casting and the creators from the get go for prioritizing that.

When you go into a film such as this you’re basically playing a firefighter what kind of boot camp did you guys have prior to shooting?

So the week before we started shooting we did a hot shot camp and that basically consisted of two major parts one being the outdoor element which was fast getting to know the gear and the equipment, wearing the you know the sort of heavy bag with all of the equipment inside it and if you’re a sawyer having a chainsaw on your shoulder having whatever tools you had on you whether it’s a rake or a pic or an axe or a shovel and going up and hiking with all of this heavy gear and hiking steep inclinations in the dry heat with the sun beating down on you and having to keep information and keep in line hiking up to the top of these mountains and that or these big large hills I should say. The second part was an indoor element where we would sit and our technical advisers who were you know amazing tools for us who would teach us so much not only about how fire worked how you needed to respond to fire how it behaves what you know the list of watch out. Have you know you have to watch out for this and watch out for that, learning how back burning works and not only did they teach us all of those things but these guys these were guys that knew the hotshots, these were guys that used to be on that same hotshot crew and that left at one time or another for whatever reason. One of them left a couple of weeks before the incident so you know they not only were generous with their time to teach us how fire works but they were also generous with time and spirit to talk to us about their friends. It really boiled it down to something simple it took all the I want to swear and say the b.s., of all the b.s. the way it stripped everything back and it made it about us talking to these guys about their friends who had passed on and how we could best represent them you know.

The cast you work with is incredible, you’ve got Miles and Taylor but what was it like working with Jeff Bridges and Josh Brolin?.

Jeff Bridges is awesome and he kind of did you know he had a sort of shoot out situation which you will often have in big movies where you have someone who you know is in certain locations and what have you. You can shoot them out so they had Jeff Bridges for like two or three weeks and we shot him out same thing with Jennifer Connolly but Josh was there the whole time. It’s one of the things that was super interesting about all of this was the fact that you had these A-List actors you know Miles Teller and Josh Brolin and Taylor Kitsch and then you had other guys who were sort of working jobbing actors that aren’t as famous as them and then you had other guys that were local hires and then some guys that was their first job ever had never worked before but all of us were all on the same Hotshot crew and that’s how it felt there was no hierarchical mentality and it was all it was all about the brotherhood and sticking together and being a team, so that was really cool going away for three months into nature with a bunch of dudes and having this sort of testosterone driven environment which was a lot sometimes but you know that there was overall one of beauty and generosity and love and with a common a common goal which was this conviction to tell these guys story properly. That was that was such a refreshing experience and it was unlike anything I’ve ever been a part of.

Moving on a little bit from Only The Brave congratulations on SWAT being picked up for a full season in the States.

Oh, thanks man. Thank you so much. And you’re currently shooting that at the moment. I’m on my way home from work right now actually. We’re all very happy and celebrating!

Only The Brave – now showing!