Greg Sestero, one of the stars of the cult classic THE ROOM, has his story coming to the big screen in THE DISASTER ARTIST, directed and starring James Franco. Greg was in town for two Q&A screenings at Luna Leederville and between the two we sat down with him for a chat about the film and why The Room is still screening all over the world.

With The Disaster Artist, director James Franco transforms the tragicomic true-story of aspiring filmmaker and infamous Hollywood outsider Tommy Wiseau—an artist whose passion was as sincere as his methods were questionable—into a celebration of friendship, artistic expression, and dreams pursued against insurmountable odds. Based on Greg Sestero’s best-selling tell-all about the making of Tommy’s cult-classic “disasterpiece” The Room (“The Greatest Bad Movie Ever Made”), The Disaster Artist is a hilarious and welcome reminder that there is more than one way to become a legend—and no limit to what you can achieve when you have absolutely no idea what you’re doing.

To check out the full interview with Greg, please listen to the audio below, the transcript only provides excerpts. Please note, possible spoilers.

You’ve been to a stack of screenings over in the States promoting the film with James etc.. how’s the response been?

Every screening has been electric, the audience I feel like they’ve been waiting for it and it really delivers in a way that’s surprising them. Obviously it’s got the comedy, but I think it really captures the emotional tone very well and it helps the audiences understand me and Tommy in a different way.

Do you find it a bit bizarre that The Room still has this massive following?

Yeah, The Room shattered every barrier that exists in its path. It’s so amazing to me that people flocked to it. There’s screenings going on in the States right now that are selling out more seats than they did 10 years ago, five years ago. People love and want to bring their friends. It’s one of those rare films. I think the only one before it that has done it consistently and for longer is Rocky Horror.

When you first met Tommy in the film it shows you meeting in drama class, was that the actual first time?

Yeah. He was just you know you go to these acting classes and you’re trying so hard and you’re kind of watching others do the same thing, you see a little bit of yourself, you’re nervous etc. The difference with Tommy, when he went up there it was (like) you’re watching a performer, even if it was completely nuts it was still fresh experience that I just wanted to explore. I loved the character. I loved the accent and the mystery and I just thought I was at a point in my life where it was intriguing to explore that.

The Disaster Artist is based off a book you have written about your experience of filming The Room, how did you find the process of writing the book?

Storytelling was always really my first love, when I was in seventh grade I saw Home Alone which is  really random. A lot of people say the movie that inspires them to get into acting is like The Godfather, but for me it was Home Alone.  I really wanted to live in that world and I just decided to write a story with myself in a part, too, so I knew right away. I really loved storytelling and it was finally the first chance I’ve ever had to have creative control over projects. And it was really liberating because as an actor you’re trying to get hired. You’re at the mercy of whoever is making that film, with the book I can actually sit down and really just go for it. So it was the greatest experience I’ve ever had in trying to do anything. It was just a great feeling to pour your heart and soul into something. Now to see people respond to it the way that you would hope.

I guess that was an exciting phone call when you found out the book got optioned?

It was the dream really because the whole reason I did the book was for it to become its own film and I studied memoirs like 127 Hours, In Cold Blood.. rich character based stories. This was obviously hard because at the end of the day your really telling a story about two friends in the making of the worst movie ever, so its hard to intelectualise and that it’s hard to turn that into a first-rate non-fiction novel, but that was the goal and when James did a review and compared it to Boogie Nights and The Master and these films that you’ve admired. From an actor like James that I’ve always admired, what more could you ask for?

What was the first conversation with James like… what was his pitch?

He saw this as a P.T Anderson film, he saw it as a Hollywood story unlike any other; Sunset Boulevard, Ed Wood, these are all things we looked at. Films we loved that were in a similar vein. So he had very a much ,you know, ambitious take on it and it was exactly the take that I’d hoped for anybody that was going on with that.

What did Tommy think of the book?

With the shoot of The Disaster Artist how involved were you with that?

I had a lot of behind the scenes footage and pictures.Just a tonne of stuff I gave production to help them out and give them some context and recreate some of the sets or the outfits. And so really just try to help them make the best movie possible. It was great because when your story is in really good hands with people you believe in, you can just kind of sit back and enjoy the experience and kind of be a fan like everybody else. And so that’s that’s what the experience is like for me. 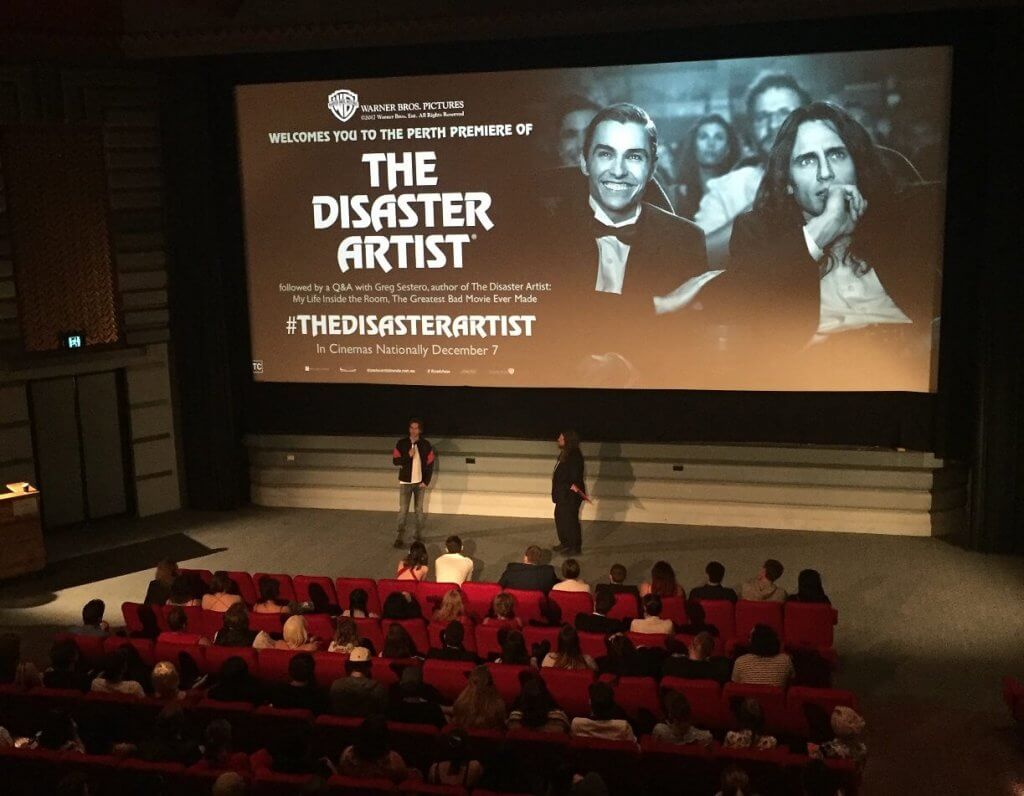 The Disaster Artist opens exclusively at Luna Leederville on November 30 with the film opening to other cinemas from December 7. (AccessReel review is here)