BOSS LEVEL is an action film that uses a time-loop plot mechanism and combines that with gaming tropes to create an actioner that gets better as it zips along. At first, I thought I knew where it was headed, but co-writers Chris Borey and Eddie Borey and co-writer/director Joe Carnahan keep flipping this tale around specifically to defy our expectations.

Ex-special forces agent Roy Pulver (Frank Grillo), uncovers clues about a secret government project that killed his ex-wife and threatens their child. He must hunt down the powerful figure responsible; whoever this is, they have sent a multitude of crazed assassins to take down Pulver as quickly, and lethally, as possible. So, Pulver has killers to kill and a mystery to solve and a very limited time-frame to accomplish this mission. And there may be some kind of Apocalypse heading his way.

This information is doled out cleverly and always at the appropriate time. Saying the action sequences are non-stop feels true, but what is presented to us is carefully paced, well-detailed and properly told. I say this because in researching this review, I have bumped into some utterly nonsensical feedback about “boring exposition”. Yeah, some folks don’t like the explain-y, feel-y bits, but when you subtract that material from an action story, you get something like a SUCKER PUNCH (2011); a movie that feels more like a collection of flashy cutscenes that leaves the audience insufficiently attached to the plight of the main characters. Carnahan and the Boreys do the necessary work to make us know what makes Pulver tick and the kind of relationship he has with his ex-wife Jemma (Naomi Watts), as well as his ten-year-old son Joe (Rio Grillo, Frank’s actual son). Further, we get to understand what makes this putative family work and not work.

The big sell here is the action, the violence and the comedy. The assassins are a rogues’ gallery of egomaniacal weirdos and a lot of fun is had showing the different fight techniques and methodologies employed to murder Pulver for money. Here the film veers close to Robert Rodriguez’s MACHETE (2010) in the over-the-top qualities of the kill team . On the bad guys’ side, Mel Gibson (who was in MACHETE KILLS – 2013) and Will Sasso are given the most time and attention. Sasso is better known for his comedic work, yet is impressively threatening and still delivers the laughs when required. Gibson doesn’t have to try too hard to be the bad guy and has one very good scene that involves Watts. Other standouts amongst the villains are Meadow Williams as the hipster, Nazi, gun-collector Pam and Selina Lo as the sword-wielding Guan Yin.

On the side of the good and righteous, are Sheaun McKinney playing an amusingly self-impressed digital security expert, Chef Jake as played by Ken Jeong and the deadly character Dai Feng as assayed by Michelle Yeoh. We don’t get enough of Yeoh, but I would say that about 9 out of 10 Yeoh movies. Naomi Watts as Jemma has a role that is short on screen time but absolutely pivotal in terms of the plot; although there is something of the scold in the conception of the Jemma character, she is ultimately, thankfully, given more to do than this. Watts is very watchable and makes interesting choices as a woman who knows she is in considerable trouble and is desperately working out how to fix things.

In the end, Grillo is the actual star of this vehicle and he carries the comedy and the action with flair. He already has fans from his work on television, in the MCU (Brock Rumlow) and The Purge movie series. If you didn’t know this body of work, and I didn’t, he comes off like a buff, two-fisted Marc Maron. (Fight me. Actually, don’t.) He takes on the physical presence of his character and its subsequent emotional development.

Director Joe Carnahan favours action film-making and is probably best known for SMOKING ACES (2006) and THE GREY (2012) – which is one of his more solid creations. He worked with Liam Neeson in the latter film as well as THE A-TEAM (2010) and there is a Neeson in-joke at one point when Pulver explains to his son how his skills differ from the actor in TAKEN (2009). Grillo also worked on THE GREY. This latest Carnahan movie feels like a sure-handed production aimed at pleasing the crowd in every possible sense, except one. The ending points somewhat obviously towards a sequel. You have been warned.

BOSS LEVEL is for an audience that likes brawling, fist-fighting, sword-play and computer games, especially classic ones from the 1980s. It is well-written and I was entertained in a similar vein to Jason Lei Howden’s 2020 flick GUNS AKIMBO (with Daniel Radcliffe and Samara Weaving). 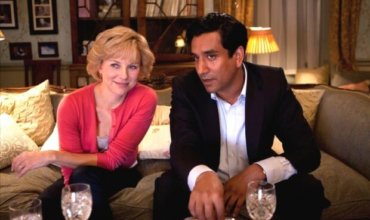 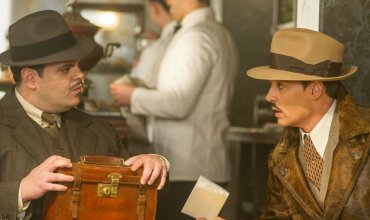