Dan (Hugo Weaving) is a veteran war photographer who is back in Australia after a tough assignment. He wants to continue with his life as always and he is in Sydney winding down before going back in the field, however his life at home is far from settled. His relationship with his partner Josie (Hayley McElhinney) is going through difficulties, his mental health is a challenge and he has pressure to curate the photographs that will become part of a retrospective honouring his work over the past three decades.

Circumstances bring Dan into contact with Sebastian (Andrew Luri) a man from South Sudan. He is a hard-working taxi driver who is married to Anishka (Bolude Watson). They have one child with another on the way. He discovers that Dan’s forthcoming show will include pictures of the massacre of Sebastian’s village from fifteen years previously. Because of this, Sebastian and Dan struggle with the real-life consequences of exposing these images.

HEARTS AND BONES is directed by Ben Lawrence. The screenplay is written by Lawrence and Beatrix Christian. The film picks up on issues about news and the portrayal of war and then intertwines them with the personal lives of Sebastian and Anishka, Dan and Josie. At the centre of the story is the question about the morality of showing photographs of human beings in extreme circumstances. To some extent, it is presented as a Western World versus other cultures argument and this is a good angle to begin with. The view espoused by Dan is that the photographs show the truth and shouldn’t the truth be presented to the world? The alternate points-of-view are interesting to explore.  What if the victim of the violence were you or your family? Would you want the world to see that truth?

Dan is portrayed as a rather closed-down individual who has PTSD and for many reasons struggles to create a balanced life with Josie. In addition to his job, Sebastian is part of a singing group whose members are from places that have experienced conflict. He is happy that he has a family in this new country, but he is haunted by the events of his past.  This creates a story dynamic where the women are trying to care for damaged men. This deliberate parallel is useful in dramatic terms, but at times feels overly familiar.

The performances are solid. Hugo Weaving runs through the gamut as the disintegrating man who doesn’t want to face his demons. Hayley McElhinney is a well-credentialled theatre actor, best known to the nation for her work in the dramedy of DOCTOR DOCTOR.  Josie is something of a helpmeet role, however McElhinney gives it the grounded-ness it requires. Bolude Watson does a notable job as Anishka and she and McElhinney have a particularly good scene late in the film which encapsulates the film’s main point. Andrew Luri as Sebastian was a non-actor before debuting in this film. He did some preliminary work with actor/dramaturg/screenwriter Nico Lathouris (you know him as Grease Rat the mechanic from the original MAD MAX). Director Lawrence has elicited a convincing and worthwhile performance from Luri.

Overall, HEARTS AND BONES tackles a subject matter that is compelling; it is a purposeful drama with something to say, although it could be better-shaped to deliver on its message. It will debut on Australian digital platforms to purchase (iTunes, Google Play, YouTube, Sony PlayStation, Telstra and Fetch TV) from May 6, 2020. That will be followed by the DVD and VOD release on June 3.

You can listen to Darran’s Interview with Hugo here. 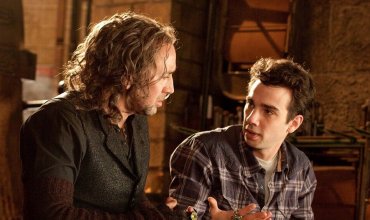